A South Carolina woman who disappeared with her boyfriend more than two months ago was found “chained like a dog” in a metal storage container on the property of a sex offender, authorities say.

1. Someone Posted on Charlie Carver’s Facebook Page & Sent Messages as Him After the Couple Went Missing

The mystery surrounding the disappearance of Charlie Carver and Kala Brown drew national attention in October when someone began posting Facebook updates and photos on Carver’s page, and sending messages to friends saying he and Brown were OK.

Family members told reporters they believed Carver had been hacked. Police and Facebook were looking in to who was sending the messages.

Joanne Shiflet, Carver’s mother, told NBC News the posts and messages didn’t sound like her son. And photos uploaded as being new were from more than a year ago, she said.

“It’s getting people thinking they are found, but they are not,” Shiflet said in October.

A screenshot of one of the messages sent to a friend was posted to the Anderson Police Department’s Facebook page.

In another message, given to The Daily Beast by a friend, the person using Carver’s account wrote, “im just missing to everyone else. We [are] both ok. there is only one person that knows where we are … the person that means the most to me and kala she know where we are and we are coming that way for ever.”

The Facebook page, which has since been taken down, also shared messages and missing posters about the couple’s disappearance, including pleas from Carver’s sister, according to The Daily Beast.

The person using the page also added milestones on Carver’s timeline, including a backdated July post that he and his girlfriend were expecting a daughter, an August post saying they bough a house and a September 1 post that the couple had married, The Daily Beast reports.

2. Family Members Grew Concerned Because the Couple’s Beloved Dog Was Left in Their Apartmen

Kala Brown and Charlie Carver had last been heard from on August 31, when Carver left for work and Brown made plans for a dinner with friends, loved ones told The Daily Beast.

Their apartment in Anderson was found unlocked and their dog was left without food and water, according to WCSC-TV. Carver’s car was also missing, but Brown’s was there.

Family members were convinced the couple didn’t leave voluntarily because their dog, Romeo, was left behind.

That dog is her baby. She’d never leave him like that,” Brown’s mother, Bobbie Newsome, told NBC News.

3. The Couple Moved in Together in August After Dating for a Few Months

The couple had been dating for a few months and moved in to the Anderson apartment together in August, a friend, Lindsey Mayson, told The Daily Beast.

Mayson told the news site that she was supposed to have dinner with the couple the night after they disappeared. She was planning on introducing her new boyfriend to them.

“That’s what that Thursday night was supposed to be about,” Mayson told the Daily Beast. “It was meeting them and having dinner with them and getting to know each other.”

4. Brown Was Fed & Kept Alive While She Was Chained Up in the 30 by 15 Container, She Told Policet

Kala Brown told police that she was fed and kept alive while chained up in the 30 by 15 storage container on Todd Kohlhepp’s Woodruff property, the Spartanburg Herald-Journal reports.

Police were led to the property by a tip and found Brown after hearing banging on the metal container. She was taken to a medical facility for treatment.

“This is tragic … that this person was being treated like that,” Spartanburg County Sheriff Chuck Wright told reporters. “We need your prayers for this lady.”

5. Police Say They Might Be Dealing With a Serial Killer After Brown Told Them Up to 4 Bodies Are on the Property

Police told reporters they might be dealing with a serial killer after Kala Brown told them there might be four bodies on Todd Kohlhepp’s property, WYFF-TV reports.

“We’re trying to make sure we don’t have a serial killer on our hands,” Sheriff Chuck Wright told reporters. (It) very possibly could be what we have.”

Police said they found weapons and ammunition on the nearly 100-acre property.

Kohlhepp, a registered sex offender in Arizona, is being held at a local jail. Charges have not yet been filed against him.

Police are using backhoes and other tools to search the large property.

“We have no intentions of leaving this property until we’re finished,” Wright told reporters.

Read more about Todd Kohlhepp at the link below: 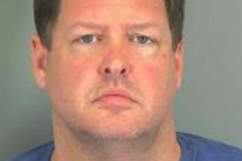