President Barack Obama pardoned his last turkey as Commander in Chief in a ceremony at the White House Rose Garden at 2:45 p.m. ET. Obama will also present the National Thanksgiving Turkey in the 69th annual ceremony.

The ceremony started in 1947 and the chairman of the National Turkey Federation will present the bird to the president. The bird will then be saved from landing on a dinner table.

There are two turkeys who will be at the ceremony: Tater and Tot. Both were born on the same day, July 18, 2016. They also love music, so Tater’s favorite song is “Me Too” by Meghan Trainor. Tot is a Justin Timberlake fan, so “Can’t Stop The Feeling” is his favorite song.

For the history of the Turkey Pardon Ceremony, click here: 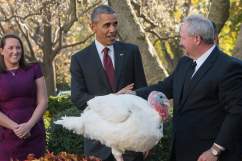