This story is developing and will be updated as more information becomes available.

There was a mass shooting in Seattle, WA, near an anti-Trump rally. The shooting took place at 3rd and Pine, according to Seattle PD. As of now, Police are saying the shooting is unrelated to the protest.

3/Pine shooting NOT believed to be connected to earlier demonstration at Westlake. Investigation ongoing.

There are five wounded, two of which have life-threatening injuries. The victims are being transported to a hospital, according to the Seattle Fire Department.

The victims included one woman and four men, and the gunshots seemed to stem from an argument, ABC News reported.

As of the time of publication, there are no suspects and no arrests have been made.

#BREAKING 5 people shot in downtown Seattle, 2 with life-threatening injuries. No word on suspects. At 3rd & Pine via @seattlefire pic.twitter.com/8aL05st6yX

The Seattle PD also released some information about the shooting, and there is a video of that statement below. 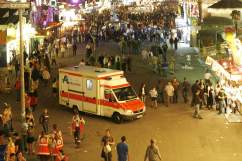 Read More
Breaking News, Crime, Donald Trump, Politics, Twitter
There was a mass shooting in Seattle near a Trump protest, but it isn't believed to be related.