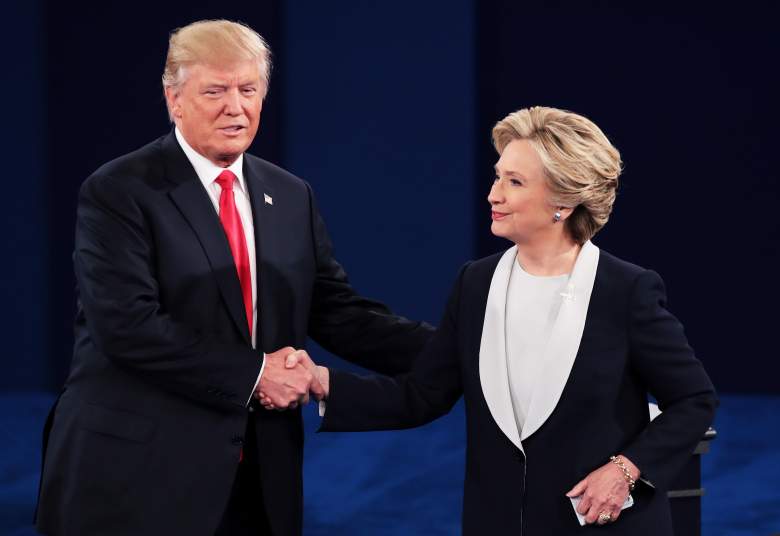 Donald Trump and Hillary Clinton shake hands at the conclusion of the second presidential debate. (Getty)

With Election Day less than a week away, Nevada remains one of the biggest open questions in the 2016 race. FiveThirtyEight, a website that uses polls to predict who will win the presidency, has Nevada at a virtual tie, giving Clinton a 50.1 percent chance of winning and Donald Trump a 49.9 percent chance.

Winning Nevada is a bigger deal for Trump than it is for Clinton. If Trump secures all the states leaning in his direction plus Florida, North Carolina, Ohio, Iowa, New Hampshire, and Maine’s second congressional district, but he loses Nevada, that puts him at 264 electoral votes, just shy of victory. In other words, he could perform the incredible task of winning almost every battleground state he needs, but his pathway is so narrow that losing just a single one of them is enough to end it all. In the aforementioned scenario, making up for a Nevada loss with a win of Wisconsin or Michigan would take him over 270, but both of those states seem out of reach at this point.

Donald Trump and Hillary Clinton are currently neck and neck in Nevada’s polls, but in recent days, following a bad week of news for Hillary Clinton, Trump has taken the lead. Real Clear Politics’ polling average has Trump ahead of Clinton in the state by 2.0 percentage points.

Here are the five most recent major polls of Nevada.

The latest poll from CNN/ORC gives Trump an impressive lead over Hillary Clinton, ahead of her by six points. The poll was conducted by speaking to 790 likely voters from October 27th through November 1st. The margin of error is 3.5 percentage points.

This is a five point drop for Clinton since this poll was conducted from October 10th through October 15th. In that earlier poll, Clinton lead Trump by four points, 50 percent to 46 percent. In the previous poll, three percent of voters chose neither candidate, and that is also the case is the new version of the poll.

Also, when the poll was conducted from October 10th through October 15th, 53 percent of voters said they approve of the job Barack Obama is doing as president. Now, 47 percent said they approve of the job he is doing. Between the two polls being conducted, it was announced that Obamacare premiums will rise next year. Donald Trump has latched onto this issue in recent weeks, pointing out that Hillary Clinton wants to keep Obamacare in place, adding fixes to it, whereas he promises to repeal it entirely.

However, Hillary Clinton is winning among female voters, ahead of Trump by five points. Trump leads among male voters, ahead of Clinton by 15 points. Hillary Clinton also has a substantial lead among voters between the ages of 18 and 29, as 55 percent of those in this group say they’re voting for Hillary Clinton whereas just 31 percent said they’re voting for Donald Trump. On the other hand, Trump leads among voters between the ages of 30 and 39, with 50 percent favoring him and 40 percent favoring Clinton.

The most recent poll from Emerson looks better for Hillary Clinton, as she is ahead of Donald Trump by two points. The poll was conducted by speaking to 550 likely voters on October 26th and October 27th, meaning voters were polled before the news broke that the FBI would be investigating new emails that may or may not be relevant to their probe of Hillary Clinton’s private server. Both of the previous polls showing Trump in the lead were conducted after that news came out. The margin of error in this Emerson poll is 4.1 percentage points.

A Gravis poll, which was released prior to the FBI email investigation news, has Hillary Clinton and Donald Trump tied. The poll was conducted on October 25th by speaking to 875 likely voters. The margin of error is 3.3 percentage points.

A plurality of Nevada voters, 47 percent, said they “strongly disapprove” of the job Barack Obama is doing as president. “Somewhat disapprove” was also an option, but only four percent chose that instead of “strongly.”

Interestingly, this is one of the few polls that specifically asked voters how they felt about the FBI’s decision not to prosecute Hillary Clinton for her use of a private e-mail server, and 50 percent of those polled said that the FBI made the wrong decision and that Clinton should have been prosecuted. Forty-five percent said that the FBI made the correct decision, and five percent said they aren’t sure.

Finally, 70 percent of voters said they are either “very concerned” or “somewhat concerned” about securing the border, a plurality of them – 34 percent – said they want to stop bringing refugees into the country, and 56 percent said that Obamacare has not been a success.

The most recent poll from NBC/WSJ/Marist shows yet another tie between Donald Trump and Hillary Clinton. The poll was conducted from October 20th through October 24th by speaking to 707 likely voters. The margin of error is 3.7 percentage points.

The previous poll from NBC/WSJ/Marist had Clinton ahead of Trump by one point.

But Hillary Clinton seems to be doing particularly well among Nevada early voters. This poll found that 13 percent of likely voters in the state have already voted, and among them, 60 percent say they voted for Hillary Clinton. But among those who haven’t voted yet, Donald Trump is favored, 46 percent to 42 percent.