Rajai Davis tied a dramatic Game Seven of the World Series for the Cleveland Indians against the Chicago Cubs at Progressive Field Wednesday night. Watch the video, above.

Davis came to bat with two outs in the bottom of the eighth inning with Cleveland trailing 6-4 — after Cubs fireballing reliever Aroldis Chapman had already allowed one inherited runner to score in the inning after relieving lefty Jon Lester.

Chapman surrendered a double to Brandon Guyer, the first batter he faced, and then gave up the two-run blast to the light-hitting, 36-year-old Davis, who choked up about an inch on his bat but ripped a Chapman fastball on alone drive just clearing the left field wall.

Davis hit only 12 home runs in the regular season this year, and has only 55 in his 11-year Major League career.

Chapman, a 28-year-old seven-year veteran who defected from Cuba in 2009, had pitched 1 1/3 innings in Tuesday after throwing 2 2/3 on Sunday. Cubs Manager Joe Maddon was heavily criticized for allowing Champan to pitch the ninth inning on Tuesday despite the Cubs’ holding an 9-3 lead. As it turned out, the fatigue clearly showed in Champan’s performance on Wednesday.

As Game Seven entered a rain delay following the ninth inning with the game tied 6-6, Fox Sports sideline reporter Tom Verducci said that Chapman, who had thrown 97 pitches over the last three games — a career high — was in tears as he headed from the dugout to the clubhouse. 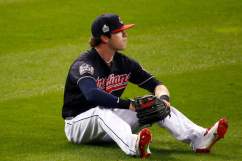