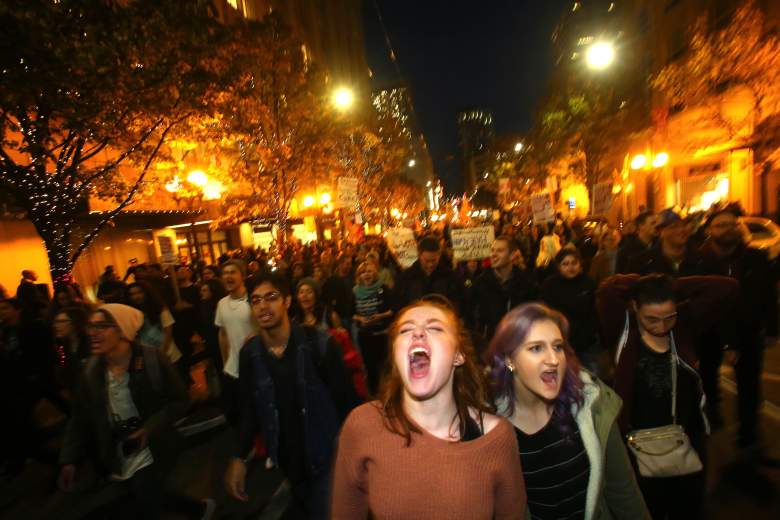 Ever since President-Elect Donald Trump won the election, anti-Trump protests and riots have been dominating the news. But where exactly have these protests taken place and which ones are planned for the future? Protests are happening all over the country, including on college campuses and at Trump buildings. In fact, Turkey issued a travel warning to the U.S. on Saturday, citing the anti-Trump protests as a concern. More protests are planned, all the way up to Inauguration Day. We have a list of the major protests that have occurred or will be occurring, along with videos and photos. We’ll be updating this list over the coming days as more protests are announced.

Trump himself had a unique response on Twitter about the protests. After he stated that he thought the protests were being incited by the media, he later changed his tune and said he hoped they could all come together eventually:

Love the fact that the small groups of protesters last night have passion for our great country. We will all come together and be proud!

The reaction to the protests have been mixed. Some are saying that they’re glad people are protesting, so that their voices are heard and people who are concerned about their safety will know that they’re supported. Others are complaining about the protests and feel that the protesters lose their message if they turn violent. Still others are voicing worry that the protesters have the wrong focus and should be protesting the Democratic National Committee for its role in the election outcome, rather than the election itself. What do you think?

Here is the list of Trump protests that have occurred or are planning, in alphabetical order by state. If you hear of any additional Trump protests, let us know in the comments below.

Los Angeles, protests occurred several nights in a row, but organizers said they were planning bigger protests over the weekend. One protest was in San Francisco and began at 3 p.m. PST and was lasting until 10, according to this Facebook event. Here’s one video from the protest:

Another protest was on Saturday, as shown in the video above below ABC 7. Thousands of demonstrators showed up for what might be the largest protest in LA yet. At least 10,000 people were there:

On Wednesday night, traffic was brought to a complete stop on a busy highway, USA Today reported. The protest was mostly peaceful, USA Today reported. However, CNN reported that at least one group burned a pinata that was in the shape of Trump’s face. About 3,000 people participated in the protests.

In Oakland, about 7,000 protesters marched on Wednesday night, CNN reported. Some threw Molotov cocktails and fireworks at police. Three officers were injured.  At least 30 people were arrested. Meanwhile, near Berkeley High School, 1,500 students walked out of class on Wednesday, but were protesting peacefully.

In San Francisco, high school students marched and chanted “not my president” on Wednesday, after more than 1,000 walked out of school.

Protests against Trump in Denver, Colorado ended up shutting down Interstate 25 near downtown one evening.

Protests began again Sunday night in Ft. Lauderdale. This video from one protest was shared on Facebook:

Anti-Trump groups called for protests in Miami and West Palm Beach on Friday night. The Miami organizers said they want their protests to be peaceful. They stressed that they aren’t against anti-establishment, they’re just against Trump being the solution to that need.

Here’s a video of the Trump protest in Miami, which began on Friday night:

As of 7 p.m. Eastern on Friday, protesters in Miami were blocking I-95:

Anti-Trump protesters are now blocking the I-95 in Miami.pic.twitter.com/OuWgxdPxXC

Here’s a photo of the Friday night group:

Protesters have been especially active in the Chicago area. ABC 7 reported there were huge demonstrations, including a crowd of up to 2,000 people on Wednesday night in Chicago. People marched down the Loop and onto Lake Shore Drive, shutting down traffic. Five people were arrested.

At one point, this video was taken of Trump protesters dragging a Trump supporter out of his car and beating him in Chicago. It’s not clear who took the video:

According to TMZ, the man was hospitalized and his car was stolen. The Chicago Tribune reported that the man who was attacked was David Wilcox, 49. Wilcox said he got caught on the car door and was dragged with the car as they drove about 70 mph.

Trump protests were going strong on Friday night in Iowa. They blocked Interstate 80, as of 6:30 p.m. Eastern. The protests began with high school students, KCRG reported.

In Louisville, Kentucky, about 500 people gathered on Thursday night to protest the Trump election. This was a peaceful protest with no violence or arrests, ABC 7 reported. You can see a video of the protest below:

Anti-Trump protesters have taken to the streets of Louisville, KY.pic.twitter.com/2zkJoYdHFa

Baltimore was also the location for anti-Trump protests, including Thursday night, where they marched in traffic to make their voices heard:

The anti-trump protest in Baltimore city went down to M&T BANK stadium and worked back into the inner Harbor area @ABC2NEWS pic.twitter.com/dZv7U6V8jK

And here’s another video:

Protests have also been ongoing in Minnesota, including one on Friday when high school students staged a mass walkout:

The protests in Nebraska also started up again on Friday night. A small group gathered to hold signs reading “Shame on White America,” and later more joined the group for a march:

The anti-Trump protesters have started to march. pic.twitter.com/k1BP1xo7Ni

Protesters told Nick Starling of Action 3 News in Omaha that they planned to stay for the night:

Protesters staying at it, organizers tell me they are staying here for the night. @action3news pic.twitter.com/ExwBS5b63e

Protests started up again in New York on Saturday. Here’s one video showing a group at a protest pen facing Trump Tower:

And here’s another video:

Walking down the Avenue of the Americas with the protest. #lovetrumpshate pic.twitter.com/czIDrQAs9h

At least 26 people were arrested. Police said many of the people were armed with bats and threw “projectiles” at police. Police responded with pepper spray and tear gas to try to disperse the groups. Here’s one video from Thursday night, as a woman is attacked in a car:

Protesters have been very active in Philadelphia. They marched near City Hall with signs that read “Not Our President” and “Trans Against Trump” right after the election. Another protest in Philly was planned for Friday night. Here’s another video of Trump protests in Philly:

Billy Taylor, who has helped organize the Trump protests, also helped organize DNC protests after the primaries ended and Bernie Sanders lost. He has said on Facebook that his rallies are peaceful and do not want violence. Taylor has said that he didn’t support Hillary Clinton or Donald Trump, but wants corruption out of politics.

He planned another protest on Sunday.

Austin had a huge protest that shut down local roads for a while on Wednesday.

Dozens of students also protested at Texas State University on campus, about 30 miles south of Austin. The rally happened after flyers warned that there would be pro-Trump “vigilante squads,” USA Today reported. The flyers showed many wearing rifles and camouflage. It’s unclear where the source of those flyers was from.

Here’s another photo of the protests:

UPDATE: anti-Donald Trump protesters are headed back up Congress toward the Capitol after more than an hour of marching in downtown Austin pic.twitter.com/dLsItk0ZPS

More protests are planned. An event in San Antonio was posted on Facebook, scheduled to begin at 6:30 p.m. Central on Saturday night. About 750 people RSVP’d that they would be attend, and nearly 2,000 indicated that they were interested.

More Trump protests are planned in Utah. Around 1 p.m. MST, a protest is planned in Salt Lake City for Saturday. On Facebook, more than 3,000 people have expressed interest and more than 1,000 have said that they plan to attend. Press releases related to the event have called for civility and no vulgarity from the protesters.

Protests were also going strong in Washington, with chants of “No Trump, no KKK, no fascist USA” near Trump International Hotel, CNN reported. In Seattle, one news report mentioned that the protesters here actually cleaned up after themselves and were focused on being peaceful. Here’s a video from November 9:

Meanwhile, in Wisconsin, more than 1,000 demonstrators took to the streets in Madison and Milwaukee on Thursday night.

Loading more stories
wpDiscuz
100
0
Would love your thoughts, please comment.x
()
x
| Reply
Many states and cities have had anti-Trump protests and more are still planned. See a complete list here, with photos and videos, of Trump protests.