Tyler Paquin, the Cleveland Indians 25-year-old rookie center fielder, set the tone for his team’s crushing loss to the Chicago Cubs in Game Six of the World Series Tuesday Night at Progressive Field, botching an easy fly ball in the first inning that allowed two runs to score with two outs.

The bonehead play, in which Naguin failed to communicate with right fielder Lonnie Chisenhall who was also chasing the bloop fly ball off the bat of Chicago’s Addison Russell, turned what had been a one-run inning off Indians starter Josh Tomlin into a three-run frame and silenced the sellout home crowd of 38,111.

The Indians went on to lose the game 9-3, leading to Wednesday night’s Game Seven battle. Watch the botched play in the following video.

Naquin offered his explanation for the blown play, taking the blame while also explaining that the crowd noise cause confusion between him and Chisenhall. Watch Naquin comment on the debacle in the video below.

“It was just loud there,” Naquin said. “It was just kind of one those in-betweeners. Lonnie got a good break, I had a break. It’s just one of those deals man. Kind of one of those you wish you could take back. Me being the center fielder, I need to take charge on that. That’s my mistake.”

With a Defensive Runs Saved metric of -18, Naquin — who played 105 games in center field for Cleveland in his rookie year — ranked as the fourth-worst outfielder in Major League Baseball during the 2016 season.

Drafted in 2012 by Indians with their first-round pick, 15th overall, out of Texas A&M University, Naquin was better at the plate than in the field in his rookie season, batting .296 with an on-base percentage of .372 and a solid slugging percentage of .514.

Indians Manager Terry Francona decided to bench Naquin for the winner-take-all Game Seven, saying that he believed the rookie was “pressing.”

“During the regular season you might kind of let him get through it,” Francona said in a pre-game press conference. “But with one game left and with [Corey] Kluber pitching, we’re trying to put a premium on catching the ball.” 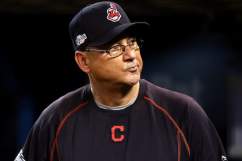 Loading more stories
wpDiscuz
0
0
Would love your thoughts, please comment.x
()
x
| Reply
Tyler Naquin, the Cleveland Indians center fielder, made a fielding mistake in Game 6 of the World Series that turned the game in favor of the Chicago Cubs.