Donald Trump might have praised the late Supreme Court Justice Antonin Scalia, but the two do not see eye-to-eye on flag burning. On Tuesday morning, Trump declared on Twitter that he would considering jailing or stripping away a person’s citizenship if they burn the flag. But in a 2012 interview with CNN, Scalia insisted that flag burning is protected under the First Amendment.

“If I were king, I wouldn’t go about letting people burn the American flag,” Scalia told Piers Morgan in the above interview. “However, we have a First Amendment which says that the right of free speech shall not be abridged, and it is addressed, in particular to speech critical of the government. I mean, that was the main kind of speech that tyrants would seek to suppress.”

“Burning the flag is a form of expression,” Scalia continued. He later added that burning a flag is an action that “expresses an idea.”

Scalia made similar comments over the years, referring to people who burn flags as “weirdos.”

“If it were up to me, I would put in jail every sandal-wearing, scruffy-bearded weirdo who burns the American flag. But I am not king,” Scalia said at Princeton University in 2015.

In his tweet, Trump showed that he disagrees with that. “Nobody should be allowed to burn the American flag – if they do, there must be consequences – perhaps loss of citizenship or year in jail,” Trump wrote.

Scalia, who died in February 2016, was on the U.S. Supreme Court when two cases centering on flag burning came up – Texas v. Johnson (1989) and United States v. Eichman (1990). In both cases, Scalia voted to protect flag burning as a form of protected free speech and agreed with the majority opinions written by William J. Brennan Jr. The 1989 case overturned a Texas state statue that banned the burning of the flag, while the 1990 case overturned the Flag Protection Act.

Trump said during one of the presidential debates that he wants to appoint judges “very much in the mold of Justice Scalia.” If that’s the case, his nominees might have to disagree with him on this point. 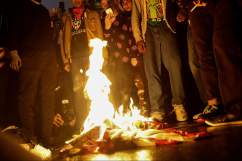 Why Flag Burning Is Protected Under the First Amendment

Loading more stories
wpDiscuz
0
0
Would love your thoughts, please comment.x
()
x
| Reply
In an interview, Justice Antonin Scalia explained why he has voted for protecting those who burn the American flag. Donald Trump wants to punish those who do.