Seattle PD gave a short talk on the mass shooting in Seattle on November 9. The shooting was near an anti-Trump protest, but police believe the shooting is unrelated to that protest.

Five were wounded, one female and four males, and the shooting seemed to have erupted from an argument. There are no suspects, though that may change. This article will be updated with more information as it is released. 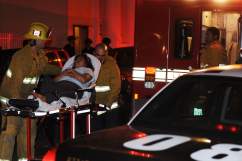 Mass Shooting In Seattle Near Trump Protest: Everything You Need To Know