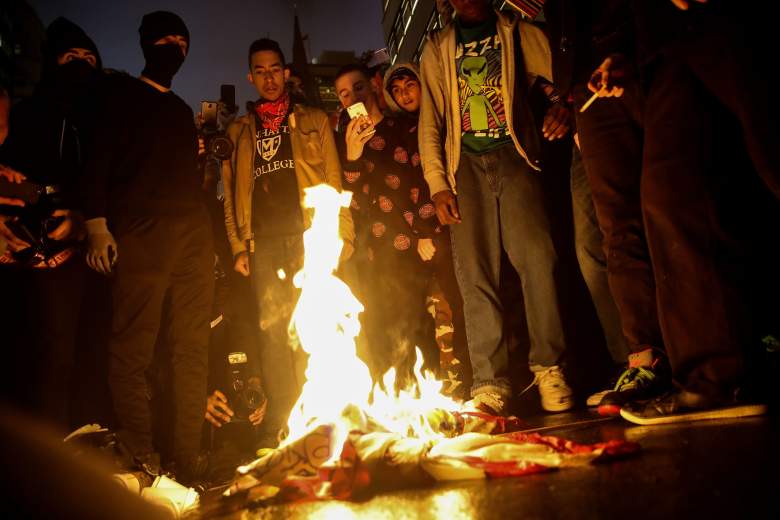 On November 29, Donald Trump tweeted that he thinks that people who burn the American flag should be jailed or even possibly be stripped of their citizenship. However, can he really do that? The answer is no, because burning the American flag is considered protected free speech under the First Amendment.

Nobody should be allowed to burn the American flag – if they do, there must be consequences – perhaps loss of citizenship or year in jail!

Trump later doubled-down on his stance that you should go to jail for burning the American flag during his rally in Cincinnati. However, as the Washington Post points out, Trump told David Letterman in January 2015 that the Late Show host was “100 percent right” that flag burning should be protected free speech.

Congress Tried & Failed to Pass a Constitutional Amendment in 2006

In 2006, Congress tried to pass a constitutional amendment to make burning the flag illegal. The measure passed in the House of Representatives in 2005, but it failed in the Senate in 2006. As the Washington Post reported at the time, the vote fell shy of the two-thirds majority needed for a constitutional amendment before it is handed to the states to be ratified. Just 66 Senators voted for it, while 34 voted against it.

One of those senators who voted against it was Senator Mitch McConnell, the current Senate Majority leader. As McConnell explained in a 2006 column:

The vast majority of Americans honor the flag, and rightly so. Some would go so far as to amend the Constitution to protect the flag against those who would burn it. While I share and admire their patriotism, altering our First Amendment, even for the worthy purpose of protecting the flag, is not a position I can support.

While he has no respect for anyone who burns the flag, McConnell continued:

Weakening our First Amendment could also set a dangerous precedent for the rest of the Bill of Rights. If we successfully carve out an exception to one basic freedom, perhaps those who seek to curtail our Second Amendment rights—the right to bear arms—will carve out another. Or the right to own private property, as expressed in the Fifth Amendment, could come under assault.

Although this was the closest Congress came to making flag burning illegal, the issue hasn’t come up to a vote since 2006.

The senate vote in 2006 came after the Flag Protection Act of 2005 was proposed in the Senate by Senator Bob Bennett, a Republican, and co-sponsored by Trump’s future 2016 opponent, then-New York Senator Hillary Clinton. The proposal, which had three other co-sponsors who were all Democrats, suggested a year in prison for desecrating the American flag and a fine of no more than $100,000. If the flag was government property, the fine would jump to $250,000 and the jail sentence would double. The proposal did not pass.

Rep. Kevin McCarthy, a Republican from California, told Morning Joe that flag burning is protected under the First Amendment, but said he doesn’t think someone should do that.

.@GOPLeader responds to Trump's tweet: Where I come from, you honor the flag… We'll protect our 1st Amendment https://t.co/sPs5hxOXYZ

The U.S. Supreme Court has also said that burning the American flag is protected under free speech. The 1969 case Sidney Street v. New York overturned a man’s conviction for breaking a New York state law that made speech against the American flag illegal. However, the Court declined to say whether or not physical actions against the flag (like burning it) were protected.

It wasn’t until the 1989 case Texas v. Johnson that the Court took a case dealing with the physical desecration of the flag. A five-vote majority ruled against a Texas state statute that banned burning an American flag.

The following year, the Court took on another case, United States v. Eichman, which knocked down the Flag Protection Act. That law made it illegal to desecrate the American flag.

In both of these cases, the late Justice Antonin Scalia, who Trump has praised countless times, voted for protecting burning the American flag. In a 2012 interview with CNN, Scalia explained why he believed this was protected under the First Amendment.

“I would not allow people to go around burning the American flag. However, we have a First Amendment which says that the right of free speech shall not be abridged,” Scalia said, noting that the Founding Fathers specifically wanted to protect anti-government speech that “tyrants would seek to suppress.”

“Burning the flag is a form of expression,” Scalia said.

In July 2016, an Urbana, Illinois man named Bryton Mellott was arrested after he posted a photo of himself burning the American flag on Independence Day. The Champaign County State’s Attorney announced that Mellott wouldn’t face charges, citing the Texas v. Johnson decision.

“Congress shall make no law respecting an establishment of religion, or prohibiting the free exercise thereof; or abridging the freedom of speech, or of the press; or the right of the people peaceably to assemble, and to petition the Government for a redress of grievances,” the First Amendment reads. 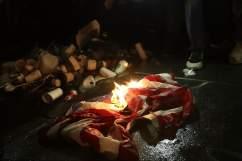 WATCH: Antonin Scalia Explains Why Americans Can Burn the Flag

Read More
Donald Trump, Politics
Follow Heavy ↓
wpDiscuz
12
0
Would love your thoughts, please comment.x
()
x
| Reply
Donald Trump tweeted that he will jail and strip the citizenship of anyone who burns the American flag. Here's why that's protected under the First Amendment.