Protesters of the North Dakota Access Pipeline, along with people from around the world are outraged that Sophia Wilansky‘s arm was blown up November 20 during a confrontation with police.

Adding fuel to the fire, one witness, in the video above, blames the police and believes Wilansky was actually targeted by authorities.

Wayne Wilansky, the 21-one-year-old woman’s father, said his daughter was wounded in a concussion grenade blast that “blew the bone out of her arm.”

“On November 21st as a direct result of the violent police response at Standing Rock towards unarmed people opposing the Dakota Access Pipeline, a 21 year old woman from New York City, Sophia Wilansky, was severely injured when a concussion grenade thrown by police hit her left arm and exploded,” a statement from The Standing Rock Medic & Healing Council stated. “Sophia was heading to bring water to the unarmed people who were being attacked for several hours by Morton County Sheriff forces. The Morton County Sheriff’s Department has stated that she was injured by a purported propane explosion that the Sheriff’s Department claimed the unarmed people created. These statements are refuted by Sophia’s testimony, by several eye-witnesses who watched police intentionally throw concussion grenades at unarmed people, by the lack of charring of flesh at the wound site and by the grenade pieces that have been removed from her arm in surgery and will be saved for legal proceedings.”

You can see photos of Wilansky’s injuries below. Please note that they are graphic in nature:

Many are worried that this same kind of carnage will happen again December 5. On Friday, the Army Corps of Engineers sent a letter to Standing Rock Sioux Tribal Chairman Dave Archambault II notifying the Tribe that they plan on closing lands north of Cannonball River, which is where the Oceti Sakowin camp is located, on December 5.

Protesters said they will not leave, and are worried that ambulances will not be able to get through to aid those who will undoubtedly need emergency services. The length of time it took for an ambulance to get to Wilansky was said to be between two and eight hours.

It is 2016, Thanksgiving weekend, and the Army Corps has decided to force the Standing Rock Sioux off of its own sacred land. This is an astounding and shameful move by the United States government. The United States has ignored Indigenous sovereignty for far too long, and Standing Rock is an opportunity for President Obama to do right for the Indigenous community and for the climate.

If President Obama and the Army Corps truly want to ensure the safety of the water protectors, they will deny the easement for the Lake Oahe crossing and rescind all permits for the pipeline immediately. Fundamentally, this is about standing with an Indigenous community fighting for its own survival by protecting sacred land, water, and climate, or siding with a greedy fossil fuel company looking to destroy all of those things.

The chairman of the Cheyenne River Sioux Tribe, Harold Frazier, issued a response to the Army Corp’s letter of intent, and you can read it below: 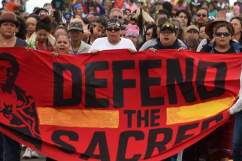 Loading more stories
wpDiscuz
24
0
Would love your thoughts, please comment.x
()
x
| Reply
A witness at the scene where Sophia Wilansky's arm was blasted at Standing Rock says police targeted the woman. One thing is for sure, and that is that something went horribly wrong November 20 at what was supposed to be a peaceful protest.