The Aleppo conflict has been creating tragic images for some time, but a Syrian activist has now urged the world to consider it “genocide.”

The activist, Lina Shamy, recorded a video widely circulated on December 13 that labeled what happened in Aleppo the day before “genocide.” USA Today said there were reports that “pro-government forces had executed civilians on the besieged city’s streets, including women and children.”

The city in Syria has been torn between rebel fighters and loyalists of President Bashar al-Assad, who is backed by Russia. The reports of genocide and mass executions came after the city fell to Assad’s control.

A ceasefire was reached and remaining people were being allowed to evacuate, rebel forces said. However, BBC said it appeared to be broken by December 14 as shelling resumed, and 50,000 people remained in the city. On December 15, the BBC reported that 3,000 people were evacuated.

Buses being evacuated were then burned, causing continuing chaos.

1. Shamy Said More Than 180 People Had Died in a Massacre & the UN Called the Situation in Aleppo a ‘Complete Meltdown of Humanity’

HUMANS ALL OVER THE WORLD, DON'T SLEEP! YOU CAN DO SOMETHING!
PROTEST NOW! STOP THE GENOCIDE!#SaveAleppo #SaveHumanity

According to USA Today, Shamy claimed that 180 people were executed by al-Assad forces in eastern Aleppo.

“To everyone who can hear me: We are here exposed to a genocide in the besieged city of Aleppo,” she said in the video. “This may be my last video. More than 50,000 of civilians who rebelled against the dictator al-Assad are threatened with field executions or dying under bombing.”

NBC News said the ceasefire came only after “dozens of civilians were killed by Syrian forces in what the United Nations described as ‘a complete meltdown of humanity’ during the final battle for Aleppo.”

Some dispute the use of the term “genocide” to refer to what is happening in Aleppo. USA Today wrote that genocide is typically “defined as an attempt to wipe out an entire group of people based on religion, national identity, ethnicity or race. There are some religious overtones to Syria’s civil war — President Bashar Assad and some of his closest advisers are from the minority Alawite sect, a Shiite offshoot — but his regime is waging war against political opponents.”

2. More Than 1,000 Civilians Have Died in Aleppo in the Past Month 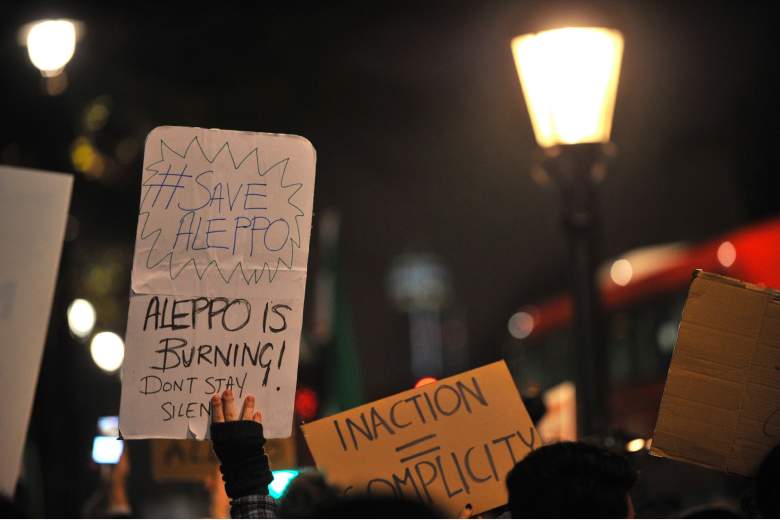 Protesters hold placards during a demonstration in solidarity with the inhabitants of the embattled Syrian city of Aleppo, outside the entrance to Downing Street, in central London on December 13, 2016. (Getty)

Since November 15, more than 1,071 civilians were murdered in eastern Aleppo “in attacks by Syrian regime and Russian warplanes,” said an Anadalou Agency report.

Rebels in Aleppo are fighting Assad and his Russian allies, said the report. According to the BBC, a government push backed by Russian air power had squeezed the Aleppo rebels into smaller and smaller areas in recent weeks and months. The BBC said Iran is also allied with Assad. 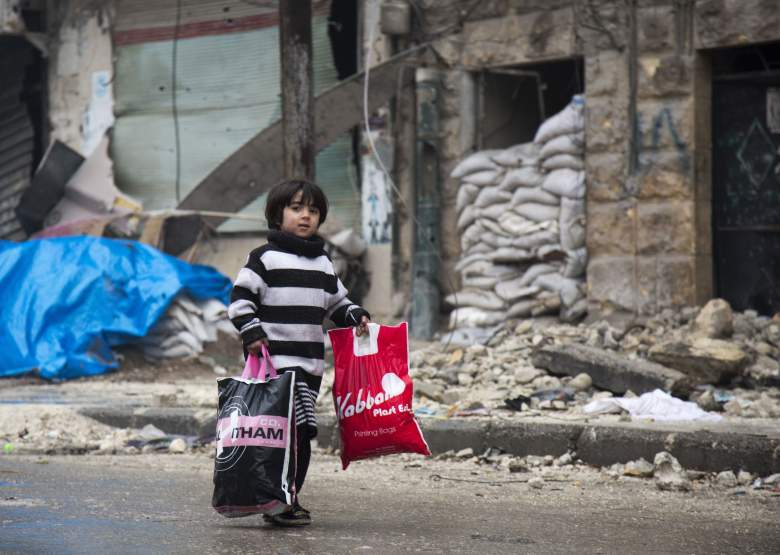 A Syrian boy is seen among other civilains leaving a rebel-held area of Aleppo towards the government-held side on December 13, 2016 during an operation by Syrian government forces to retake the embattled city. (Getty)

The Daily Star said an UN observer contends that women and children were executed en masse, with one child even burned alive.

“Civilians were reportedly earlier lined up and shot in mass executions while at least one child appears to have been burned alive,” said the news site. Assad has been cracking down on pro-Democracy movements since the Arab Spring, with some of the most tragic consequences seen in Aleppo and especially images of its children.

NBC said the UN human rights office received stories of “women and children being burned alive and of families choosing suicide over surrender.”

There were reports of old men dying in the cold, unaccompanied children, bodies littering the streets, and women choosing suicide over rape, said The Daily Beast.

4. The City Was Being Evacuated But There Were Reports That Russia Was Blocking Evacuations 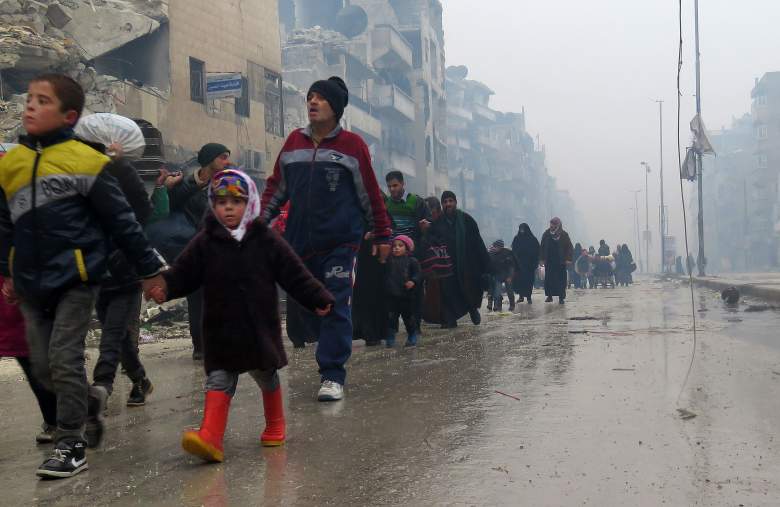 The news of a ceasefire came on December 13 from rebel forces, but NBC News said the Syrian government had not confirmed it and a Russian envoy told the news media that people had no reason to evacuate now that the ruined city was in government control. However, BBC reported it was soon broken, adding that the UN had said it was possible war crimes were occurring in Aleppo.

The BBC said Assad now controls all of Syria’s population centers. According to BBC, Aleppo was once Syria’s most populous city and its financial center besides. 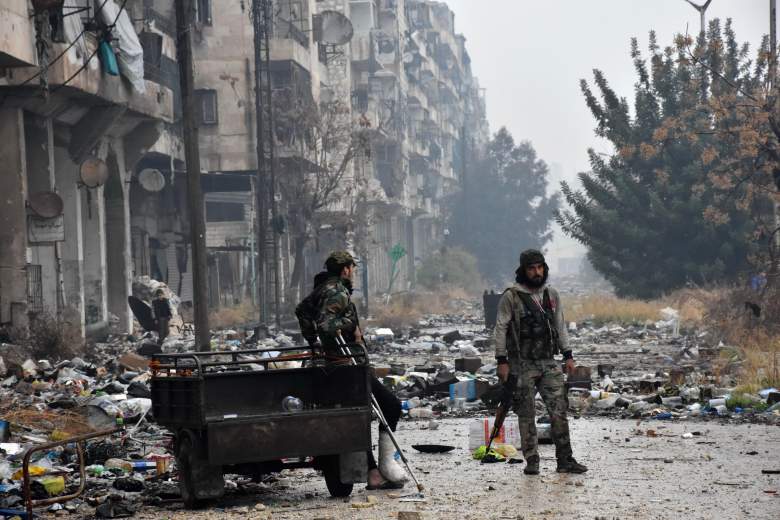 Syrian pro-government forces walk in Aleppo’s Bustan al-Qasr neighbourhood after they captured the area in the eastern part of the war torn city on December 13, 2016. (Getty)

The American news media fixated on December 13 over the story that Kanye West was spotted at Trump Tower to meet with Donald Trump (that came the same day that Trump announced he was choosing Rex Tillerson, the Exxon Mobil CEO who has ties to Russia, as his secretary of state). Many took to Twitter to criticize what they see as the news media downplaying what is going on in Aleppo to focus on trivialities.

Can everyone shut up about Kanye & Trump, people are literally tweeting their goodbye message to the world due to a mass genocide in #aleppo

Children in Aleppo are dying, but the media cares more about Trump meeting Kanye than their lives. This. is .disgusting. #PrayForAleppo

There's a genocide happening. Innocent people are being shot to death right now. And I'm watching the news cover Trump and Kanye. #Aleppo

THERE IS A MASS GENOCIDE GOING ON RIGHT NOW IN #ALEPPO

Why do we care more about Kanye meeting Trump than the lives of countless innocents?

Loading more stories
wpDiscuz
8
0
Would love your thoughts, please comment.x
()
x
| Reply
There were reports of an Aleppo genocide as a ceasefire was reportedly reached following Syrian government forces taking control. Reports say women and children were murdered in a mass execution.