#Germany #Berlin – This is Anis #Amri, the suspect of the #BerlinAttack. This pic was sent to all European police agencies. pic.twitter.com/684dr7d629

Italian police shot and killed a 23-year-old Tunisian refugee they believe was behind the Berlin Christmas market attack.

Anis Amri was already under investigation by police for terrorist links, and video has surfaced of him pledging allegiance to ISIS, CNN said.

Spiegel Online said Amri was identified as having suspected ties to ISIS months ago by German authorities, who decided he needed intensive monitoring. Yet, he was given a stay of deportation, even after allegedly being nabbed with a forged passport.

Authorities found documentation with his name on it inside the cab of the vehicle and a massive manhunt was underway to find him when an Italian officer confronted him in Milan, he pulled out a gun, and a shootout ensued. The New York Post said the documentation included a “stay of deportation.”

1. Police Were Already Tracking Amri for Planning an Attack Before the Christmas Market Tragedy & U.S. Security Officials Were Aware of Him Too, Reports Say

The UK Daily Mail says that German authorities already had Amri on their radar screen before the Berlin Christmas market attack. “He had already been under investigation for planning a ‘serious act of violence against the state’ and counter-terrorism officials last exchanged information about him in November,” the news site said.

There were reports that Amri was also on the radar of U.S. officials.

Berlin suspect Anis Amri was on the radar of U.S. security services. He had communicated with ISIS at least once. https://t.co/R8lnqY0yYf pic.twitter.com/0NfLEI0kUi

The Mirror says Amri “has reportedly been linked to Islamist preacher Abu Walaa.” He was born in Tataouine, which Daily Mail described as an “ISIS stronghold.” The Bild newspaper quoted one official as saying, “To our knowledge he was ready in the early part of this year to find an accomplice for an attack and was interested in acquiring a weapon.”

According to the Sun, Abu Walaaa was “arrested in Hildesheim last month for recruiting radicals into the ranks of ISIS. Walaa was arrested along with five members of a terrorist recruiting network operating on behalf of the so-called Islamic State, according to prosecutors.”

Spiegel Online said, “An entry relating to an undercover investigation of the man on Feb. 5 states, ‘Suspected ties with IS’ and ‘intensive monitoring of the subject.’ Earlier this year, the authorities classified the man as a ‘potential threat,’ a category used by police to describe people the authorities believe could attack at any time.”

2. Amri Was Arrested in August With a Fake Passport but Was Not Kicked out of the Country & Shot a Cop When Asked For His Papers

When an Italian police officer in Milan asked Amri for his papers, he began shooting, injuring an officer named Cristian Morio while shouting “Bastard cops.” CNN said Amri had lived in Italy and may have made it through two European borders – in Italy and France – before being killed.

The news site said that Amri’s application for German asylum was rejected but he wasn’t deported because he lacked identification papers. The Sun said he arrived in Germany earlier this year. At one point, he even lived with what the Daily Mail termed a “hate preacher” who was “under arrest for involvement with ISIS.”

The Star said Amri was living in temporary housing while waiting a decision on his asylum status.

3. Amri Is Believed to Be Linked to the Terror Group Responsible for a Beach Massacre & Filmed a Video Pledging Allegiance to ISIS’ Leader

The Mirror reported Amri may have ties to “the terror group which allegedly inspired last year’s Tunisian beach massacre which left 38 dead.”

The Mirror said that organization is the radical Islamist group Ansar Al-Sharia.

4. The Christmas Market Attack Killed 12, Including the Polish Driver of the Truck

BPolice stand at the area after a lorry truck ploughed through a Christmas market on December 19, 2016 in Berlin, Germany. Several people have died while dozens have been injured as police investigate the attack at a market outside the Kaiser Wilhelm Memorial Church on the Kurfuerstendamm and whether it is linked to a terrorist plot. (Getty)

The suspect drove the large Polish truck onto the sidewalk, smashing into the crowd, and killing 12 people and injuring 48.

It’s believed the truck was hijacked. The Polish truck driver, Lukasz Urban, was found dead in the truck at the scene.

CBS said the Polish truck had a GPS tracking device and, by 3:45 p.m. on December 20, the day of the attack, “there were indications that Urban was no longer in control of the truck; it was being driven as if the person inside was ‘learning to drive.'”

5. Another Man, a Pakistani Refugee, Is No Longer Believed to Be a Suspect 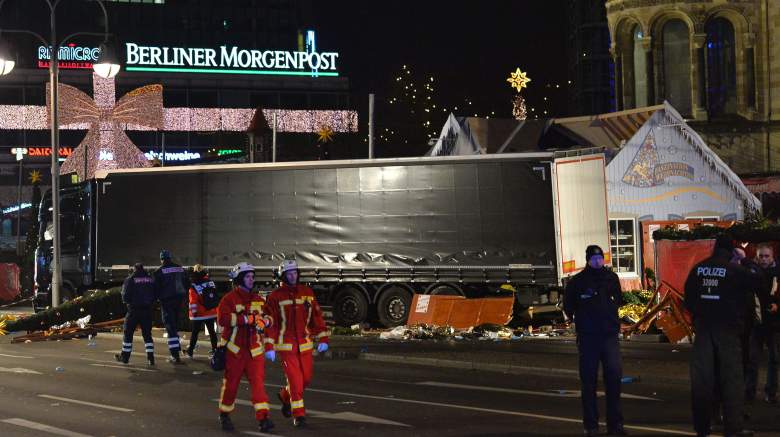 Fireworkers pass by the truck that crashed into a christmas market in Berlin, on December 19, 2016 killing at least one person and injuring at least 50 people. (Getty)

Police had originally detained another man, a Pakistani refugee, after the attacks, but they now believe he had nothing to do with it, police sources told German news media. They also raided a large shelter for asylum seekers in Berlin, said Samaa-TV.

Read More
Breaking News, Germany
Follow Heavy ↓
wpDiscuz
6
0
Would love your thoughts, please comment.x
()
x
| Reply
Anis Amri is wanted in the Berlin Christmas market attack in Germany that killed 12 victims. A refugee from Tunisia, he was born in an ISIS stronghold.