Passengers aboard a flight from Minneapolis, Minnesota, to Los Angeles, California, were in for a rude awakening when their flight was disrupted by a couple’s outburst after the plane took off Wednesday night.

According to Minneapolis authorities, Christine Anne Koosmann, 36, and Blake Adam Flesig, 35, were arrested after causing the commotion, as reported by CBS Minnesota.

The flight, which departed at 6:20 p.m., returned back to the Minneapolis terminal at 7:35 p.m, and the couple was taken into custody.

Patrick Whalen, who took the cell phone video above, told CBS Minnesota that “a flight attendant told him Koosmann had tried to use the bathroom shortly after takeoff and became physical when she was told to stay seated.” The couple was reportedly given a warning before the flight was sent back to Minneapolis, according to the station.

“In my a million miles on Delta, I’ve never seen anything like this,” Whalen told CBS. “The captain gets on and says, ‘If people in the back don’t start following instructions of the flight crew, I’m going to turn the plane around.’”

In the first part of the video, officers appear to have the situation under control and passengers can be heard cheering. Quickly after, chaos erupts and a dog can be heard barking along with people yelling as authorities desperately try to reestablish order.

“Just let them get off the plane,” one passenger exclaimed.

When Koosmann and Flesig are finally led to the front of the aircraft, Flesig appeared to get physical with another passenger as Koosmann curses. “You’re already going to jail,” an officer replies to Koosmann’s outburst.

In response to the disruption, Delta issued the following statement, according to the Washington Post:

The flight crew of Delta 2565 from Minneapolis-St. Paul to Los Angeles elected to return to Minneapolis shortly after takeoff when two passengers refused to follow crew instructions, became aggressive and created a disruption in the cabin. The passengers were removed by local law enforcement. The flight re-departed without further incident. The safety of Delta customers and employees is our top priority.

Koosmann was still being held as of Thursday evening on charges of disorderly conduct, as she was reportedly not cooperating with police, according to CBS.

Fleisig, who authorities said cooperated, was arrested and released on charges of disorderly conduct, in addition to “brawling or fighting” charges. 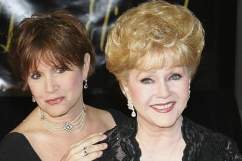