During a rally in Cincinnati on Thursday evening, President-Elect Donald Trump mocked ABC News anchor Martha Raddatz, saying that she cried after he won the presidency.

While Trump was accusing the media of being dishonest and unfair to him, he said that someone who hosted a presidential debate was so upset when he won the election that she started crying. Trump mentioned this in a quick aside and did not go into detail or name the person.

“How about when a major anchor, who hosted a debate, started crying when she realized that we won?” Trump said.

The president-elect was referring to Martha Raddatz, who co-hosted the second presidential debate with Anderson Cooper. During ABC News’ Election Night coverage, Raddatz became emotional when discussing Trump’s foreign policy positions, saying that he does not seem to be very experienced or knowledgeable. Raddatz did not actually cry as Trump said during his rally, but she did seem to get a bit choked up while reading a statement from Tim Kaine about not trusting Trump to be commander-in-chief.

“This is ridiculous and untrue,” a spokesperson for ABC News said in a statement. “Martha is tough and fair and not intimidated by anyone.”

Raddatz also responded to critics on November 10th by saying that it is fiction to suggest that she got choked up during election night coverage.

During his campaign, Donald Trump repeatedly said that the election was rigged because the media was ganging up against him and that journalists were in the tank for Hillary Clinton. As evidence to support this, he said that all of the debate moderators were biased, particularly going after Lester Holt but now bringing Martha Raddatz into the picture as well.

Raddatz has been criticized by conservatives for having Barack Obama at her second wedding in 1991 but not disclosing this to the public. Obama attended the ceremony because he knew the groom, Julius Genachowski, as the two went to Harvard Law School together.

After mentioning Raddatz in Thursday’s speech, Trump spent at least 10 more minutes mocking the media for saying that he could never win the presidency.

“I’ll never forget it, because it felt so good,” Trump said of proving the pundits wrong. 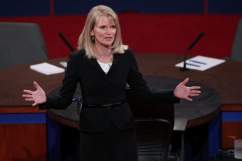 Loading more stories
wpDiscuz
1
0
Would love your thoughts, please comment.x
()
x
| Reply
During a rally in Cincinnati, Ohio on Thursday night, Donald Trump mocked ABC News' Martha Raddatz and said that she cried when he won the election.