Everyone who cares about Gatlinburg, Tennessee has seen photos by now of the horrific devastation – lives lost, homes destroyed, dreams crushed.

However, the tragedy has also brought people together, provoked strangers to reach out to other strangers, highlighted heroism, and demonstrated the strength of the human spirit. It is the American way; when tragedy strikes, good also emerges.

Here are the top photos that illustrate that point:

This American flag provided a symbol of hope and unity as the devastation surrounded it. In addition to the photo of the police officer with the flag, other images of the flag were widely shared on the internet.

I've never seen a more beautiful and acurately representative photo of this community, this state, this country. Thank you, God. pic.twitter.com/ChOg2VNrR5

Glad to be home..but would do anything to be back in #Gatlinburg to continue on working.. pic.twitter.com/JD01oE8DZj

The Gatlinburg tragedy provoked a renewed focus on the heroism of public servants, such as firefighters, who risk their lives to protect their communities. This photo of firefighters taking their first break after battling the blaze for 30 hours was much shared, moving many people.

The firefighters are members of the Johnson City Fire Department, and the photo was taken by Kevin Colbaugh, of the department.

3. The Religious Statue That Survived

People looked for signs of survival amidst the rubble, and as with the metal cross that survived Ground Zero, this statue gave many people hope.

This elderly couple dressed up like Santa Claus and Mrs. Claus to give stuff animals to kids at a wildlife shelter. The tragedy created images and highlighted deeds of people who reached out to think beyond themselves and assist strangers and community.

An elderly couple dressed as Santa and Mrs. Claus yesterday and gave stuffed animals to kids staying in wildfire shelters. I might cry. pic.twitter.com/fHM930vxXz

5. The Smokey the Bear Drawings

They weren’t photos, really, but the Smokey the Bear drawings captured the emotions of the area.

A man found this Bible verse in the area near the Gatlinburg fire, and its words provided comfort to some that God was watching over the area and caused others to speculate about “end times.”

You can learn more about the Bible verse here: 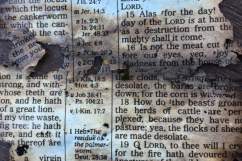 7. The Therapy Horse for an Autistic Child

The love people also showed for animals was very moving. There was an effort to raise funds to help heal this wounded therapy horse, which is a companion to a 5-year-old autistic child. There were also efforts to reunite stranded animals with their owners.

PLEASE RT and help this therapy horse be reunited with the autistic little girl who needs her #Gatlinburg https://t.co/eV2D23nhuo

Loading more stories
wpDiscuz
2
0
Would love your thoughts, please comment.x
()
x
| Reply
Many Gatlinburg fire photos captured tragedy and devastation. These pictures captured strength of the human spirit and inspired as the Tennessee fire raged on.