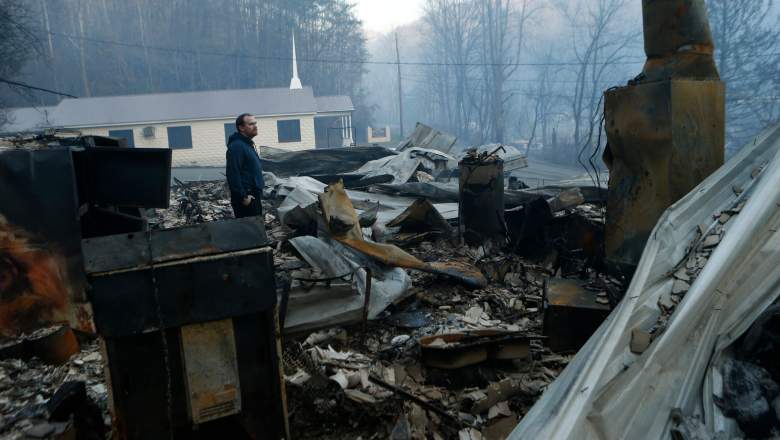 The scene in Gatlinburg. (Getty)

The devastating blaze ripped through more than 20,000 acres in the tourist area near the Smoky Mountains. Many of the dead were staying in a community named Chalet Village. As many as 1,000 buildings were destroyed, said The Knoxville News Sentinel, which has done some of the best local reporting on the tragedy.

All of the victims have not yet been named, and authorities are still searching through the debris. However, many of the fire victims have now been identified. They include two married couples and a mother and her two daughters.

Here is an updated list of fire victims as of December 3:

Family photos posted to Facebook show Hagler with her grandchild. She left behind a loving family, including two sons who searched for her for days. One of her sons is a pastor in Savannah, Georgia, and the other son lived with her. (Facebook)

Alice Hagler was the first fire victim identified. She was living in a cabin in Chalet Village and called her son to say that her house was on fire. The call disconnected, and she was never seen alive again, said WATE-TV. Hagler was a retiree who worked in a Christmas store.

A family photo of Alice Hagler (right), the first victim identified in the Gatlinburg fire. She was a grandmother and a mother. Hagler lived on the same street as a the Reed family. (Facebook)

Her son wrote on Facebook, “With a heavy heart, I want to let all of you know that my mother has passed away. I would like to thank all of you for your prayers and support in this troubling time! I would also like to thank all of the public servants who worked around the clock to bring mom back to my brother and I. Please continue to pray for our family…. and again thank you!!” 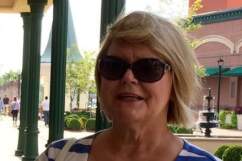 Brad Phillips did not survive the fire, according to a social media post from his niece, which said that his body was recovered outside his home. A WVLT reporter also confirmed the death on Facebook. Phillips’ wife was saved because she was out of state visiting her mother when the fire broke out, their daughter said in a Facebook post seeking to find Phillips before his body was identified.

The above photo was the photo circulated by family when Phillips was first reported missing. His daughter Amanda Phillips also wrote on Twitter: “#Gatlinburg #gatlinburgmissing
Dad missing since yesterday, Brad Phillips. Prayers for all the missing. Pls help if seen.” Her post was dated November 29.

Many people have been deeply moved by the story of Michael Reed, who was searching for his wife, Constance, and their two daughters, Chloe, 12, and Lily, 9. Tragically, Constance Reed and the two girls have now been confirmed dead.

Constance had shared a powerful story of abuse before she died.

The father, Michael Reed, survived. The Reeds were last seen at Chalet Village. Michael had gone with his son to check out the fire reports in Gatlinburg, and was not able to reconnect with his wife. She called him, and he told her to call 911 after she said she saw fire across the street from their house, said WATE, which added that Constance Reed only made it partway up a hill while trying to escape.

The Summers family. This photo was Janet Summers’ cover picture on Facebook. On Facebook, she provided the following biographical information: “Customer Service Professional at Daybreak Outsourcing. Worked at World. Airways. Studied at Merit College of Court Reporting. Went to Richfield High School, Waco, TX Lived in Memphis, Tennessee.
From Houston, Texas.” The sons are recovering in the hospital. (Facebook)

Jon and Janet Summers and their three sons were in Chalet Village celebrating a birthday when the fire broke out. The Memphis couple and their sons tried to escape by car, said WBIR.com, but ran into debris. They exited the car to escape by foot and ended up separated, the station said. The parents were found deceased. The three adult sons – Wesley, Jared, and Branson – lived and were being treated in a burn unit, although one is now released.

May Vance died of a heart attack after inhaling smoke.

Vance’s online obituary says, “May Evelyn Norred Vance, age 75 of Gatlinburg, formerly of Nashville, passed away Wednesday, November 30, 2016 as a result of the Gatlinburg wildfires. She was a 1960 graduate of Hillsboro High School in Nashville, along with her future husband, Jimmy. In 1964, she graduated from Tennessee Polytechnic Institute, and following her marriage to Jimmy, spent most of her professional career working with him in his law office in Nashville. Mrs. Vance enjoyed gardening, sewing, trips to the beach, animals, and especially spending time with her grandchildren.”

Wrote a woman on Facebook, “This is my Uncle, Rev Dr. Ed Taylor. He lives in Gatlinburg, TN. I haven’t heard from him. If anyone knows where he is and that he is safe from the fires please post or message me. Thank you — feeling concerned.” Sadly, Taylor did not survive the fire. (Facebook)

Taylor, a local reverend, was found dead outside his home of smoke inhalation. Local 8 said that Taylor was a well-known 85-year-old reverend who performed many weddings in the Gatlinburg area.

Rev. Ed Taylor is on the left. A woman posted this photo on Facebook after he died, saying that she was married by him. (Facebook)

WJHL-TV said that Taylor’s dog was found wandering unhurt around the property. Taylor was a World War II veteran, said the station.

The Knoxville News Sentinel said the Teglers were from Canada. They were both in their 70s. The couple was from Woodstock, Ontario. 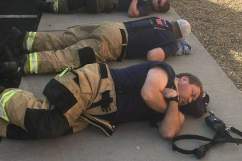 Gatlinburg Fire Photos: The 7 Most Moving Images of the Tragedy

Loading more stories
wpDiscuz
1
0
Would love your thoughts, please comment.x
()
x
| Reply
Gatlinburg fire victims in Tennessee include a mother and daughters from the Reed family, couples, a reverend and others. The updated list of deaths is at 13.