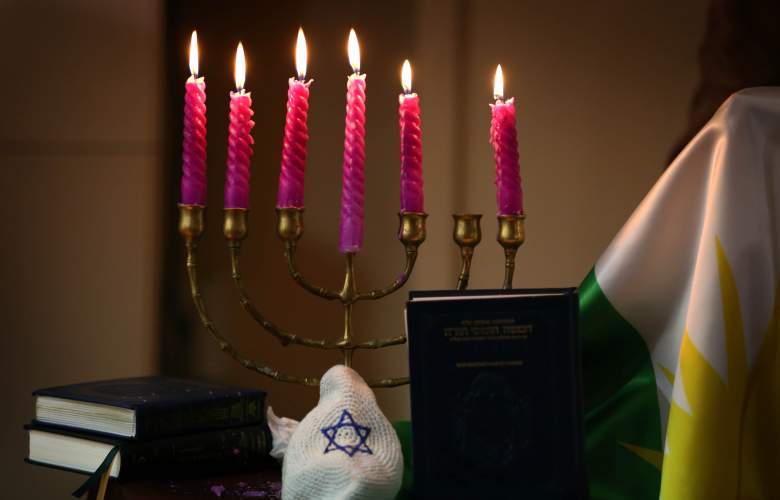 Hanukkah starts on the night of December 24, but that doesn’t mean you are out of luck if you don’t have a Menorah yet. There are countless “do-it-yourself” ideas on the web to help you make your own. We’ve included a few of the best and most original ones we can find.

Before we get to the DIY Menorahs, a little history on why we need a Menorah to celebrate the holiday is important. Hanukkah celebrates the Maccabees’ successful rebellion against King Antiochus IV Epiphanes of the Seleucid Empire. During the rebellion, the Maccabees retook the Second Temple in Jerusalem. When the Maccabees arrived in the temple, they wanted to re-dedicate it.

As Chabad.org explains, the Maccabees had to make their own Menorah and discovered that there was only enough pure olive oil to keep the temple lit for a single day. However, thanks to a miracle of G-d, the oil lasted eight days, until they could make more oil. We celebrate Hanukkah to mark that miracle, lighting our own Menorahs for eight days.

The Ground-Rules for a DIY Menorah

Hanukkah StoryHey everyone, this is the story of Hanukkah, based on our Hanukkah app. kids can learn about Hanukkah in an interactive Fun way. The whole family could sing hanukkah song, see who will get the highest score in trivia, or play together the exciting Dreidel game. Hope you will enjoy it2015-10-19T15:59:35.000Z

First off, it’s important to remember that a Menorah doesn’t have to be fancy. After all, the Maccabees weren’t able to add Disney characters to their Menorah over 2,000 years ago.

There are only three things a Menorah must have: a row of holders for eight candles at exactly the same height, and another spot for the shamash (helper light) should be easily identifiable. You could place the shamash light in a candle-holder that is taller than the other eight or possibly lower. The key is to make the shamash easily recognizable compared to the other eight.

The third thing you need to do when making a Menorah is thinking about a strong holder for the candles. You don’t want lit candles falling over and a metal holder is the best way to go about keeping them secure. For example, WikiHow suggests using small metal hex nuts like these.

How to Make a Popsicle Stick Menorah | Sophie's WorldHere is a wonderfully simple craft to brighten your Hanukkah celebration – a menorah made of popsicle sticks. Crafting expert Sophie Maletsky shows you how to make your own lamp stand to celebrate the Festival of Lights. For a complete how-to for this project go to: http://www.sophie-world.com/crafts/popsicle-stick-menorah popsicle stick: http://amzn.to/2gJQMJA hex nuts: http://amzn.to/2hwCw3E craft spools:…2013-11-13T16:23:46.000Z

The above video explains how to use Popsicle sticks to create a Menorah. It’s a great way to get children involved in the holiday, since they can decorate the sticks with their favorite colors to make a unique Menorah that’s their own.

OK, so that above video is just a look at Toy Story PEZ Dispensers. A post on Lifehacker from 2006 explains how PEZ Dispensers like those could be used to make a Menorah. The person who suggested the idea explained how they executed it to Lifehacker:

We bought a wooden plaque and wooden flower pots from a craft store, and spray painted them silver. Then we used modge-podge to decoupage the PEZ wrappers along the base of the plaque. Then my daughter and I hot glued the PEZ onto the plaque in a lovely pattern. We then sprayed the PEZ on the base with a glossy lacquer to preserve them. We hot glued the silver flower pots onto the top of each PEZ dispenser, and then hot glued the dispensers onto the base. It came out so cute, that we decided to make another one for my sister with a different looking base. My daughter won for Most Creative Menorah!

If you have a lot of extra LEGOs around (and who doesn’t?), you can use them to build a Menorah. In case you don’t have the blocks you need to build the Menorah seen in the above video, you can buy it a set on Etsy from a seller named notgirlscoutcookies. Obviously, you won’t get them before the start of this year’s Hanukkah, but it’s a cool idea for 2017.

Clay isn’t just useful for making dreidels for Hannukah. You can also use it to build a Menorah from scratch. According to WikiHow, “polymer clay such as Fimo or Premo” will work well. The site suggests that you wear gloves while sculpting the Menorah and using a craft knife to cut it. In addition to the instructions at this link, the above video also explains how to make a clay Menorah.

Wood + Lit Candles = Bad idea, right? Well, you can actually make a Menorah out of wood safely. The video above shows you how. MarthaStewart.com also explains how you can use a branch to make a Menorah. The site suggests using a branch that’s at least 16 inches long, with a raised knot that can be used for the shamash. “Mark nine evenly spaced dots with a pencil, one on top of the knot; drill holes with a 3/8-inch bit,” the site reads. “(Hole size depends on candle size.) Paint with craft paint. Let dry, and affix self-adhesive bumpers to the bottom if desired.”

MarthaStewart.com also lists nine other DIY Menorahs that would be fun to make and will impress any guest you welcome to your home this Hanukkah.

Read More
Hanukkah
Hanukkah is tomorrow, but don't fret if you don't have a Menorah yet. Here's how easy it is to make one on your own.