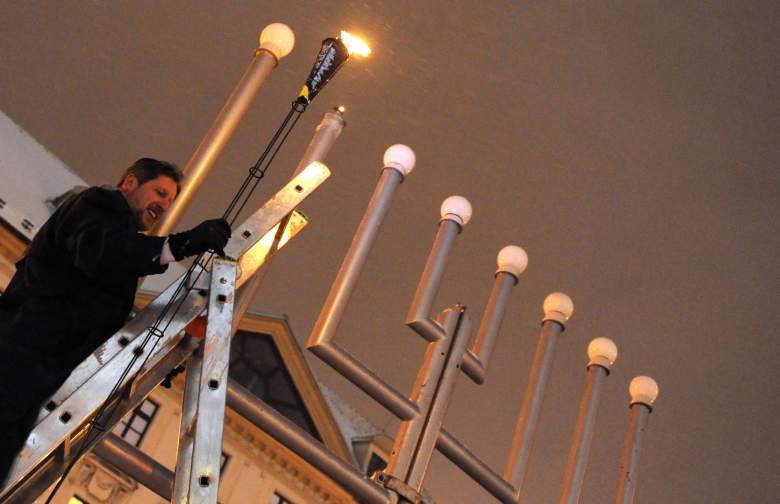 A giant menorah being lit by the Israeli Ambassador to Slovakia in 2010. (Getty)

For such a well-known holiday, the spelling of Hanukkah is confusing. Is it “Chanukah” or “Hanukkah“? Do you need a “C” at the beginning? Are two “K’s” really necessary? The answer to both those questions is “no,” because there is no “correct” way to spell the Festival of Lights’ true name in English.

The word “Hanukkah” is a transliterated version of the Hebrew term for the holiday, חנוכה. You can transliterate – that is, spelling the word out based on how it sounds in English letters – that as “Hanukkah” or “Chanukah,” depending on how you pronounce the word.

As Chabad.org points out, the first letter in the Hebrew word is chet, which doesn’t sound like the “ch” at the start of “child.” Instead, it’s more like the sound you make when pronouncing Johann Bach’s last name. There’s no real English equivalent to this sound, but the “H” is close enough. But since we use “ch” at the end of other words to replicate that sound, Hanukkah can also be spelled with a “C” at the start. You could even spell it “Xanuka” if you wanted.

For a long time, “Chanukah” was the preferred spelling. However, by 2011, as Time Magazine points out, “Hanukkah” became more popular on the Internet. The following chart from Google illustrates this. You can see that “Hanukkah” has become much more common than “Chanukah” since 2004.

Again, there’s no official spelling for “Hanukkah,” but the Hebrew Union College Jewish Institute of Religion notes that the Library of Congress considers “Hanukkah” the preferred spelling.

Loading more stories
wpDiscuz
3
0
Would love your thoughts, please comment.x
()
x
| Reply
The spelling variations of Hanukkah have confounded people for generations. Is there are correct way to spell the name of the Festival of Lights?