This is all I see in my news feed. I told you back in 2012 in my first art book that #Kanye is the #DarthVader of #HipHop. Here he is cozying up to Emperor Elect Donald J. Palpatine. I had to work this piece up this morning, it's a study for what will eventually be a painting. There's an old saying: "All things in their time." Glad to say work is going well on my Darth Yeezy helmet made from @_fabessole_'s Solar Yeezy IIs – I aim to unveil it at @rswdsd in February as part of my next art show… 'Til then soak it in. #KanyeWest came on the scene as a golden child producer turned rapper whose ties to commercial and conscious Hip-Hop held the potential to unite the Force. We've watched the change blasted center stage on every platform you can imagine. We know he's slipping, we know not only are we losing him but he is losing himself. Yet we still cheer for the bad guy. #TrumpWest2020 #MakeTheEmpireGreatAgain #StarWars #KanyeWest #DonaldTrump #notmypresident

When Kanye West met Donald Trump on December 13 at Trump Tower to talk about “multicultural issues,” the jokes flew. It almost wrote itself.

The pair emerged for a handshake, with Trump declaring that they have been friends for a long time who talked about life. “Just friends. Just friends. He’s a good man… He’s doing well. We’ve been friends for a long time,” Trump told reporters. After standing expressionless, West responded, “I just wanted to take a picture right now” as reporters peppered him with questions about whether he was going to perform at the inauguration or still run for president in 2020. “You take care of yourself. I’ll see you soon,” Trump told West.

West later tweeted that he wanted to talk with Trump about “multicultural issues,” as well as Chicago violence, bullying, “supporting teachers, modernizing curriculums.”

Some people were upset about all of the media attention granted to the Kanye/Trump meeting, especially with continued deaths and injuries to children in Aleppo.

/ Glad to know humanity cares most for Kanye meeting Trump than what's happening in #Aleppo. — It makes me sick. Honestly. pic.twitter.com/ezBc4vC8gS

? RT @FattMernandez: Trump is meeting with Kanye because Kanye is designing the uniforms for the camps. pic.twitter.com/luSzb7Uoi4

Some wondered what Kim was thinking about all of this, since she previously posted a selfie with Hillary Clinton (Kanye was in the background of it). Shortly after the election, West announced from a concert stage that he did not vote but, if he would have voted, it would have been for Trump. He was also overhead making a similar point on an airplane as far back as March, but he donated money to Clinton’s presidential campaign.

This Is How Kim Kardashian Really Feels About Kanye West's Controversial Meeting With Donald Trump! … pic.twitter.com/Gn8pPDniUI

Kanye we just wanna know are u taking your Meds? U should have offered #Trump some he got Psychological problems too @TMZ pic.twitter.com/Uc17VsMs44

Kanye came back to stop himself from talking to trump… he was too late pic.twitter.com/fVLjveaWEF

Read more about the meeting here: 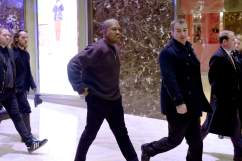 Kanye West at Trump Tower: What Was West Doing There?