Today, Sheriff Joe Arpaio concluded a multiple-years-long investigation into President Barack Obama's long-form birth certificate. During his press conference, he presented information from two forensic investigators who concluded that Obama's long-form birth certificate is not authentic, but had portions forged (essentially, copied and pasted) from Johanna Ah'Nee's certificate. The information was presented during a detailed press conference, however copies of the evidence were not given to the media or posted online after the conference. Arpaio said that they would be presenting all this and additional evidence to the federal government for further investigation. At the end of the conference, he did not take questions, stating, "We're not going to answer any questions. There's more sensitive information that we have regarding this matter and I'm not going into it."

President Barack Obama announced on Thursday that he will be having a press conference at 2:15 p.m. Eastern at the White House on Friday. It's not known yet if this conference is in response to Arpaio's claims.

This article contains the best information gleaned from Arpaio's press conference, including photos from the presentation and details about what his experts believed was forged. The photos, however, will appear fuzzy at times because they were taken from a video of a video. Since Arpaio did not provide copies of evidence online, this is the best that's available from the press conference at the time of publication. Click through the gallery to see the photos and evidence that were presented to the public during the press conference. (Getty) 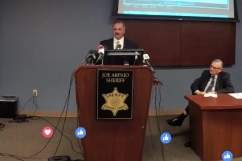