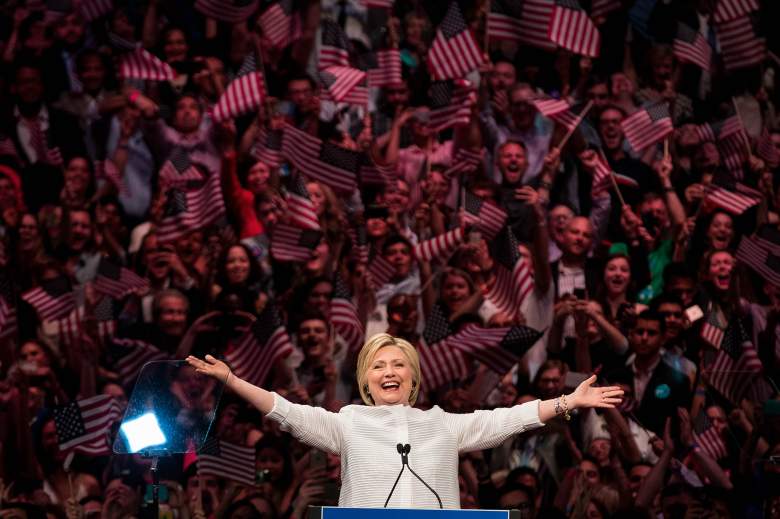 Hillary Clinton arrives onstage during a primary night rally at the Duggal Greenhouse in the Brooklyn Navy Yard. (Getty)

This means that Hillary Clinton is slowly approaching the same number of votes as Barack Obama won in 2012; she’s behind Obama by about 800,000 votes at this time. She also has the largest popular vote lead of any losing candidate in history. The last person to lose the election but win the most votes was Al Gore, who won 543,000 more votes than George W. Bush. Before that, Benjamin Harrison lost with a lead of 90,000, Samuel Tilden lost with a lead of 250,000, and Andrew Jackson lost with a lead of 38,000.

Clinton’s lead over her opponent is about as large as the lead many presidents maintained in their election, including George W. Bush, Jimmy Carter, Richard Nixon and John F. Kennedy.

This result shows that on a national level, the polls were not quite as wrong as one might initially think. Real Clear Politics’ final national polling average showed that Hillary Clinton was 3.2 percentage points ahead of Donald Trump; she ended up leading him by 1.8 percentage points in the popular vote.

However, the Clinton campaign severely underestimated the importance of the rust belt states, specifically Wisconsin, Pennsylvania and Michigan. Had Clinton held on to those three, she would have been elected president, yet her campaign made virtually no effort to compete in Wisconsin while instead spending time trying to flip red states like Arizona, which ended up voting for Donald Trump anyway. And the polls were wrong in states like Pennsylvania, where Clinton had a 2.1 percentage point lead before the election.

Hillary Clinton’s supporters have been touting her popular vote lead over the past few weeks, mocking Donald Trump for not being able to win the most votes on Election Day. Trump and his supporters have hit back by saying that the election is not based on votes, it’s based on electors, and that Trump would have campaigned much differently if the system was set up based on the popular vote.

Clearly, Clinton’s popular vote lead has gotten to Trump, though. He recently tweeted the false statement that he would have won the popular vote if there weren’t millions of illegal votes cast. There is no evidence that voter fraud took place on such a large scale, and in the days since, neither Trump nor his supporters have been able to back up this claim.