Sean Spicer speaks to members of the media in the White House briefing room. (Photo by Alex Wong/Getty Images)

Sean Spicer is President Donald Trump’s press secretary, and he will be speaking to reporters on behalf of the administration every day for the foreseeable future.

This is a particularly important position in the Trump administration, as it’s no secret that the president is not a fan of the press. Trump has repeatedly called members of the media disgusting and dishonest, and he recently said that he has a “running war” with the press.

Sean Spicer spoke from the White House briefing room for the first time on Saturday, January 21st, and he scolded the media for their coverage of Donald Trump and falsely said that Trump’s inauguration was the most well attended in history. In his first press conference two days later, Spicer said that it is not his intention to ever lie to the media, but he did not backtrack on any of his statements about the size of the inauguration crowd.

Spicer was born September 23, 1971, at North Shore Hospital in Manhasset on Long Island in New York, according to his birth announcement in the Newport Daily News. His parents were living in Port Washington at the time. He grew up in Barrington, Rhode Island.

So who is Sean Spicer, the Trump administration’s spokesperson? Here’s what you need to know about him:

1. He Was Communications Director for the Republican National Committee During the 2016 Election 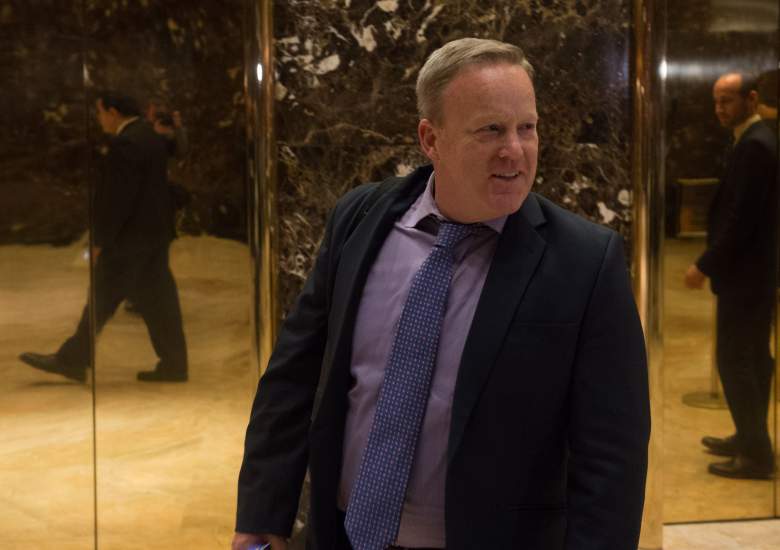 During the 2016 election cycle, Spicer was the chief strategist and communications director of the Republican National Committee.

Spicer started as communications director for the RNC in 2011, and he added the title of chief strategist in 2015. Among other duties, Spicer was the one to organize all of the Republican presidential primary debates, working with broadcast networks and determining debate formats.

In addition, Spicer worked on planning Republican primaries and caucuses, and he helped to select delegates heading into the Republican National Convention, according to his profile on GOP.com.

Before coming to the RNC, Spicer worked at a public relations firm called Endeavor Global Strategies.

2. His Wife Is a Former TV Producer Who Worked in the Bush White House

Excited to have had the hopportunity to sit down with @NBWABeer's SVP of Communications & Public Affairs @RebeccaMSpicer to talk beer! pic.twitter.com/Sa36zvx2wX

Sean Spicer is married to Rebecca Miller Spicer, who herself used to have a job in the White House. She has experience in television, and she worked as the associate director of communications in the George W. Bush administration, being responsible for producing key televised events like bill signings, according to her profile on the National Council for Adoption website.

Prior to this, Rebecca worked in television news, spending many years producing the evening broadcast for an ABC affiliate in Washington, D.C. She was working this job when she married Sean Spicer on November 13th, 2004 at the St. Alban’s Episcopal Church in Washington, D.C. Her other TV jobs have included positions at KTRK in Houston, WTNH in New Haven, WVTM in Birmingham, and CNN in Atlanta.

At the moment, Rebecca Miller Spicer is the senior vice president of National Beer Wholesalers Association, which represents the interests of beer distributors. Rebecca has two bachelor’s degrees, the first in studio art and art history from the University of the South, and the second in telecommunications from Indiana University, according to The New York Times.

Rebecca and Sean have two children.

3. He Was a Free Trade Advocate in the Bush Administration

This is not Sean Spicer’s first time working in the White House. In fact, Spicer worked in the George W. Bush administration from 2006 to 2008, with his formal title being assistant United States trade representative for media and public affairs. Essentially, Spicer was responsible for being President Bush’s communicator on issues related to trade, often speaking to international media on behalf of the president. Spicer logged 440,000 miles during his time at the White House, according to GOP.com.

While he was working under President Bush, Spicer was an advocate for free trade, which is at odds with President Trump’s position on the issue today. On January 23rd, President Trump withdrew the United States from the The Trans-Pacific Partnership.

In an interview with The Washington Post, Spicer acknowledged the contradiction there but compared his situation to a lawyer who has to defend a criminal, implying that he still disagrees with Trump when it comes to trade policy.

“There are doctors who help people who have done bad things, there are lawyers who defend bad people,” Spicer told The Washington Post. “I don’t think it’s unique to my profession.”

Before coming to the White House, Sean Spicer was communications director for the House Budget Committee, and prior to that, he worked at the National Republican Congressional Committee and the House Government Reform Committe.

4. He Was Once Critical of Donald Trump’s Comments About Immigrants & John McCain

Like almost every Republican in Washington, Sean Spicer was once critical of Donald Trump. When Trump launched his campaign by saying that many undocumented immigrants are rapists and murderers, the Republican party struggled to undue the damage caused by these comments. Although Spicer had to be diplomatic and did not directly call out Trump, he did imply that comments like these were damaging to the GOP brand.

In a conversation on CNN about Republicans’ attempts to appeal to Latinos, Spicer said, “I mean, as far as painting Mexican Americans with that kind of a brush, I think that’s probably something that is not helpful to the cause.”

He was more directly critical of Trump when the candidate disparaged Senator John McCain by saying that he is not a war hero because he was captured.

Spicer said in a statement at the time, “Senator McCain is an American hero because he served his country and sacrificed more than most can imagine. Period. There is no place in our party or our country for comments that disparage those who have served honorably.”

Trump never apologized or expressed any regret for the John McCain remarks.

Finally, after the first Republican primary debate, Spicer said that Trump needed to actively work on getting his language under control.

“…He needs to understand that he’s seeking the presidency of the United States now, and that words do matter,” he said in an interview on Today.

5. He Frequently Criticized the Media During the 2016 Election

The first time Spicer spoke in the White House briefing room on behalf of President Trump, he lectured the media about their coverage of the 45th president. This was not too surprising to see for those who followed Spicer throughout the presidential election, as Spicer often called individual journalists dishonest and bad at their jobs. In particular, Politico was a frequent target of his.

Nope. Typical @politico sensational faux reporting. If u believe this I have a bridge to sell you https://t.co/4Vq3PsIBPD

This is not accurate. As usual @politico failed to even contact RNC https://t.co/i2o6Lod0Kz

Top notch reporting! A @GOP memo from October 2013 (3 years ago) said this. Maybe need to draw @politico @politicoalex a picture next time https://t.co/nnk0EMSlPm

The RNC was not "hacked". The @nytimes was told and chose to ignore. Exhibit #1 in the fake news https://t.co/vDUxDr81wr

Actually i didn't. Please actually talk to people before you report off bad reporting https://t.co/G76uVn7Yqv

100% false – they posted before I was asked & I didnt "give" to anyone – par for the course for ur faux "reporting" https://t.co/JvDqHddTXZ

That was so original. Better than your fake reporting tho https://t.co/YniSbiXDXE

What scoop? You falsely said RNC was paying for the band and you're still wrong. Just apologize. Come on try it https://t.co/Jhb0caMWZ2

It's a false, made up @politico story. Despite "quoting" @reince @poltico never spoke with. Pathetic "journalism" https://t.co/UBild2Tu0m

since @INJO is doing so well maybe its time to send "reporters" to journalism 101 (so they can actually "report") https://t.co/bCT4TQB36L

Spicer is also not afraid to engage in a shouting match on cable news, butting heads with CNN’s Michael Smerconish in a December interview about Russia’s involvement in the presidential election. And he is clearly proud of the way that he represents Trump on television, as Spicer posts every one of his cable news appearances on his personal YouTube channel.

Sean Spicer said this week that he plans to hold the media accountable during his time with the Trump administration.

“The president is committed to unifying the country and that was the focus of his inaugural address,” Spicer said. “This kind of dishonesty in the media, the challenge of bringing about our nation together is making it more difficult. There’s been a lot of talk in the media about the responsibility to hold Donald Trump accountable. And I am here to tell you that it goes two ways. We are going to hold the press accountable as well.”

Spicer’s willingness to battle with the press dates back many years. According to The New York Times, when Spicer was a student at Connecticut College, an article in the school’s paper inadvertently referred to him as “Sean Sphincter.” He wrote an angry letter to the editor saying that the paper had intentionally attacked him.

“While those involved claimed that this was a copy joke that went unnoticed, I believe that it was a malicious and intentional attack,” Spicer wrote. “For a paper which claims to be run by ‘professional’ standards, I find it a bit sad that this type of reporting is explained as a simple part of production.”