"Something happened. Something incredible. Something beautiful. It was unintended. It was by accident. But something beautiful happened. Something that no politician has been able to do. Something that no religious leader has been able to do. Something that no diplomat or peace maker or human rights activist or group has been able to do. But in a place, a small place that before now, most people never knew existed. A place called Standing Rock. A group of Indigenous Americans came together. They united to stop a monster. A corrupt, sick, powerful monster made of money and greed and hate and all the ugliness of man. A venomous black snake that had the potential to poison millions of humans and this small band of warriors stood tall and strong and defiant and stopped the monster. No one but a few heard. The snake had already silenced the voices of those who would tell the story. And they knew that, and they didn't back down. They stood in peace and in prayer and with one another and the Protectors of the water grew stronger. The snake attacked and bit them. It hissed and attacked over and over and the Protectors never wavered. They stayed strong in prayer and in peace and never retaliated even under the pressure of the constant attacks. And the word slipped out. And the people came. And came. And came. And they all stood together. Brothers and sisters of all races and colors and religions and social backgrounds and they stood united against the monster snake. And the word spread. There were protests and marches and money collections and supplies donated to the cause and people came from all over the planet, from all over Mother Earth to help these Peaceful Warriors stand up and protect the one thing that every living thing depends on to survive. Water. These warriors. These beautiful Water Protectors did the impossible. They united a planet. We are now one people. One race. We are for the first time in the history of mankind an entire planet united as one! And we have a handful of Native Americans from a place that no one had ever heard of doing the impossible to thank. Against all odds they CHANGED THE WORLD. Thank You Water Protectors. We can never repay you. ~ David Riley #NoDAPL #WaterIsLife #StandWithStandingRock." Click through the gallery for more photos of the celebration! (Getty) 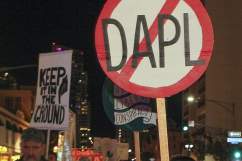 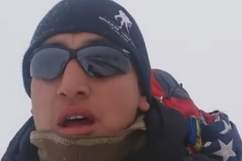 Read More
North Dakota
Water protectors at Standing Rock are celebrating a victory, as it was announced today by the U.S. Army that they will instead seek another route. See the celebration here.