In a bizarre scene highlighting how Donald Trump has already brought unlikely faces together in the same room as president-elect, CSPAN cameras caught the Naked Cowboy getting into an elevator at Trump Tower. Just behind the famous Times Square performer was North Dakota Senator Heidi Heitkamp.

Heitkamp thought it was funny, tweeting to CSPAN after she got out of the elevator:

.@cspan Cowboys are my people – even if they aren’t from ND.

TNaked Cowboy, whose real name is Robert Burck, is a big Trump supporter. In fact, Burck declared his support for Trump in September by appearing in front of Trump Tower and singing an original song about the billionaire. “If you really want to make America great again, vote for the man whose name is on my rear end,” Burck sang.

Burck has been hanging around Trump Tower in recent days. He’s even been seen performing for the media in the lobby. 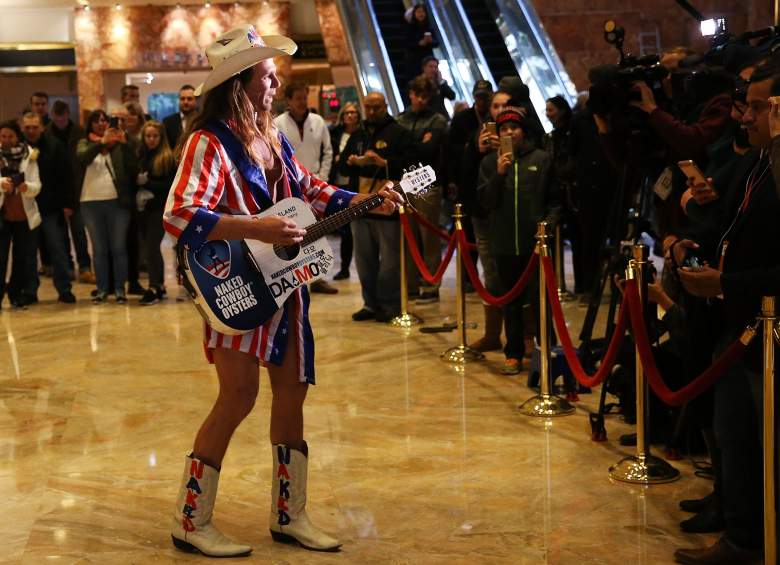 The Naked Cowboy at Trump Tower on November 21. (Getty)

In a statement, Heitkamp said that she appreciated “the president-elect inviting me for a meeting” and hopes to “work with the president-elect and all of my colleagues in Congress on both sides of the aisle to best support my state.”

“I appreciate the president-elect inviting me for a meeting. Every single day, my work is motivated first and foremost by how I can be most helpful to the people of North Dakota. They are my driving force and have been throughout my career in public service. Whatever job I do, I hope to work with the president-elect and all of my colleagues in Congress on both sides of the aisle to best support my state.

The first-term Senator also posted a photo on Twitter from the Trump lobby, as she bumped into fellow North Dakotans.

Just walked into Trump Tower and ran into some @UNDmhockey fans from Fargo. Looking forward to tomorrow's game! #UNDProud pic.twitter.com/BwN7TsVavD