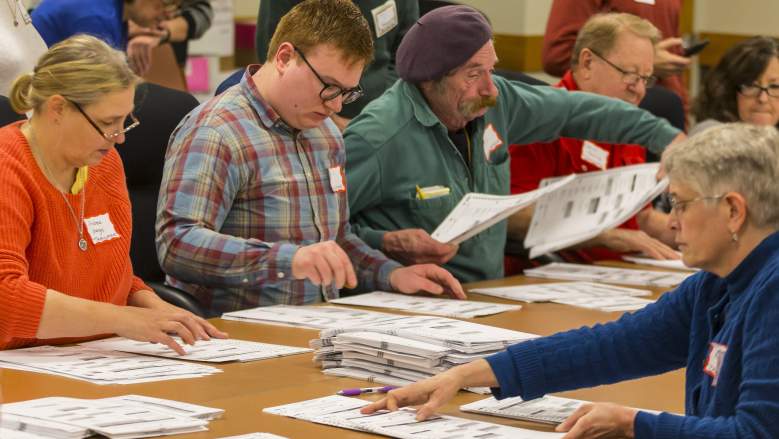 The Wisconsin recount results show that Donald Trump has retained his lead after seven days of recounting ballots, with 70 percent complete.

(Update: You can now read day 8 totals here. They show the recount is 82 percent complete, and Clinton has gained 61 net votes, but that’s nowhere near enough to matter.)

Trump/Pence are up 410 votes
Clinton/Kaine are up 492 votes
Castle/Bradley are up 12 votes
Johnson/Weld are up 46 vote
Stein/Baraka are up 60 votes
Moorehead/Lilly are up 9 votes
De la Fuente/Steinberg are up 7 votes.

“So far, not including the City of Milwaukee, Clinton/Kaine have gained 82 more votes than Trump/Pence, but still trail,” the Commission said.

That’s because, although errors have been found throughout the state – everything from voters not using proper pens to jammed ballots – they have resulted in both candidates losing and gaining votes. That’s basically cancelled out any gains for either, putting the election results back almost to where they were before the recount. Here is the raw spreadsheet of totals for December 7, Day 7.

Green Party nominee Jill Stein paid $3.5 million in donated money to force the Wisconsin recount, which Trump has labeled a “scam.” Hillary Clinton’s campaign has said it was participating. Stein is also seeking recounts in Michigan and Pennsylvania; both are bogged down in legal battles, although the Michigan recount did start on December 5

Here’s what the Wisconsin Election Commission is reporting on Day 7 of the recount, in its own words:

-“After Tuesday, December 6, approximately 70 percent of the 2.97 million votes cast in the election have been recounted, and all Wisconsin counties remain on track to finish their work by the deadline of 8 p.m. Monday, December 12.”

-“The Commission is now able to provide a running tally of how many votes each candidate is up or down. However, the numbers do not include the City of Milwaukee, which has reported partial numbers for individual reporting units (wards or combinations of wards) because it is recounting absentee ballots separately.”

The Commission said it wanted to also clear up “fake news” being circulated on social media, saying these are the facts:

-“Votes for Trump/Pence are not being counted twice in Waukesha County.”

-“Ballots can be inserted in scanners face up or face down. Before ballots are scanned, campaign representatives have already had a chance to view and question them.”

-“In St. Croix County, warranty seals on some scanners were broken by an authorized technician performing maintenance. The technician did not have replacement seals with him. Based on evidence provided by the St. Croix County Clerk’s office and the equipment manufacturer, the Commission staff is confident that the voting equipment is accurately tabulating and reporting the results in St. Croix County.”

The commission also released a separate letter and affidavit designed to debunk concerns raised about ballot scanners on the internet.

“Questions have been raised by some recount observers in St. Croix County about the security of voting equipment,” the Commission wrote. “The Wisconsin Elections Commission has been in contact with the St. Croix County Clerk and the equipment manufacturer, Elections Systems & Software (ES&S), and is confident that this is not an issue that would have affected the accuracy of the results reported by the equipment.”

The Commission added: “St. Croix County municipalities use DS200 scanners from ES&S. On a couple of occasions after the equipment was purchased, ES&S sent out a technician to service modems in the scanners, which are used on Election Night to transmit unofficial results to the county. In order to service modems, the technician was required to break a “warranty seal” covering an access screw to open a door on the scanner. Unfortunately, the technician did not have replacement warranty labels with him to affix after completing his work. ES&S has produced an affidavit from the technician attesting to the fact that he was the person who broke the seals, why he did so and why they were not replaced.”

You can read the affidavit here.