Sixty four out of Wisconsin’s 72 counties had completed the Wisconsin recount as of Day 9, with at least 1,322 net votes changed since the recount began, according to the Wisconsin Election Commission.

The errors have included everything from jammed ballots to voters using the wrong pens, but they have not represented a significant shift at all in Donald Trump’s overall margin of victory.

There are now 64 of 72 WI counties that have completed their recount. You can see the updated list here: https://t.co/glwep4CXYf

Since both Trump and Hillary Clinton gained votes overall, the net result is almost nil, and Trump retains his 22,000-plus vote lead with Clinton only gaining a net 49 more votes after nine days of counting. However, there are a few catches: The City of Milwaukee tallies are still not public, even though Milwaukee has now finished counting. All of Republican stronghold Waukesha County was not yet reported on day 9. Populous Dane County, a Democratic stronghold that includes the state capitol, is not expected to finish its hand recount until Monday, said Fox 6 Milwaukee.

Meanwhile, on December 9, a federal judge rejected an effort from Trump supporters to stop the recount.

“It is crystal to me that I don’t have the basis for stopping the recount,” Judge James Peterson said, according to Wispolitics.com.

The Commission, which reported the new totals at midday on December 9, said, “All (counties) appear to be on schedule to finish by the deadline on Monday.” Meeting that deadline is necessary for Wisconsin’s electoral votes to count when the Electoral College meets on December 19.

#WIRecount wrapping up in Waukesha County. Last ballots have been run thru machines. Bd of Canvassers now at work. pic.twitter.com/fu5ExTudpP

The Commission provided these tallies:

The net change is +1,322 votes. (The candidates gained and lost votes throughout wards in Wisconsin, so the totals below represent the amount they have gained or lost after overall losses are subtracted from overall gains.)

That means that Clinton has gained a net 49 votes over Trump, nowhere near what she would need to prevail in the state.

#WIRecount continues – at least for the City of Milwaukee and Milwaukee County. Milwaukee counts absentee ballots in this photo — pic.twitter.com/ZQZXg2noBC

The City of Milwaukee returns were expected shortly; however, as of late evening on December 9, they still had not materialized without explanation as to why. WISN-TV Milwaukee quoted Milwaukee County Clerk Joe Czarnezki as saying all Milwaukee ballots had now been counted. He told the TV station only “minor errors” were found; Channel 12 said reports were being finalized and data needed to be entered.

Also on December 9, an Indianapolis election observer named Amber Cleveland alleged she observed irregularities in Republican stronghold Waukesha County and an organization contended she was urged to publicize them by the Democratic Secretary of State, Doug LaFollette. She is a Green Party observer.

On December 7, the Election Commission had decried claims it said were being made on “fake news” sites about Waukesha County, writing, “Votes for Trump/Pence are not being counted twice in Waukesha County. Ballots can be inserted in scanners face up or face down. Before ballots are scanned, campaign representatives have already had a chance to view and question them.”

The Election Commission provided explanations for these changes for the Day 9 tallies:

“Ashland County: Original election results were inadvertently entered as recount results for the Day 6 update. The recount results have been correctly updated to the Day 9 spreadsheet.

Calumet County: Increase of 15 ballots in City of Chilton Wards 1-5 because ballots were marked incorrectly on Election Day. Voter intent was determined during recount canvas. +11 votes for Trump/Pence and +4 votes for Clinton/Kaine.

Green Party candidate Jill Stein requested the Wisconsin Recount and shelled out $3.5 million in donated money for it. A recount she requested in Michigan was ended by a federal judge, and a Pennsylvania recount request is bogged down in courts. Nevada completed a partial recount requested by an independent candidate and found almost no change. You can read about that result here: 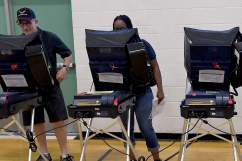