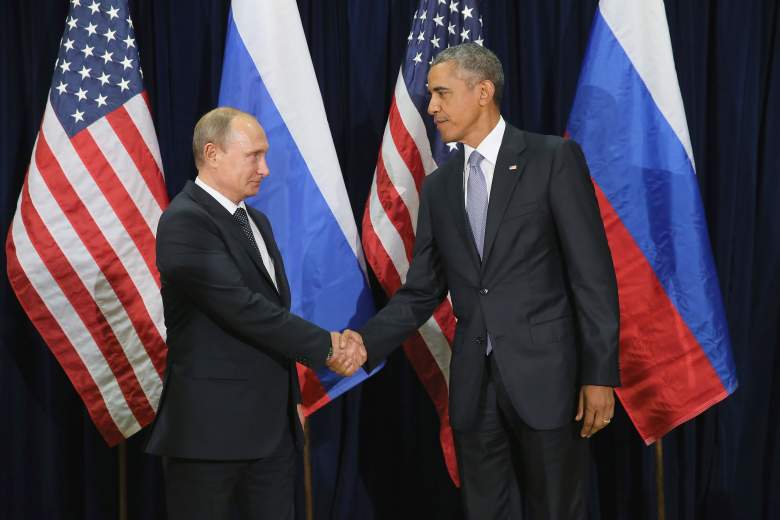 Russian President Vladimir Putin and U.S. President Barack Obama shake hands for the cameras before the start of a bilateral meeting at the United Nations headquarters September 28, 2015 in New York City. (Getty)

Smart people are talking about Franz Ferdinand and comparing his assassination, which started World War I, to the assassination of Russia’s ambassador to Turkey, Andrey Karlov. They’re wondering if there’s any scenario where this assassination might eventually lead to World War 3. If you’re noticing that the term “World War 3” is trending, it’s not because world war is imminent, but it’s because of these comparisons.

I have never expected — much less wanted — my expertise in the Sarajevo 1914 assassination & coming of #WW1 to be too relevant. #Ankara

Archduke Franz Ferdinand of Austria, the heir to the Austro-Hungarian throne, was assassinated on June 28, 1914 in Sarjevo. He was killed by Gavrilo Princip, a group of six assassins who were working on his assassination.

Ferdinand’s assassination was the trigger to the war, which resulted in Austria-Hungary delivering an ultimatum to the Kingdom of Serbia. International alliances on both sides were invoked and within mere weeks, the major world powers were at war. The war led to two major opposing alliances: The Allies vs the Central Powers. The Principal Allied Powers were the British Empire, French Republic, Italy, and Japan, with other Allied Powers including Armenia, Belgium, Greece, Hejaz, Poland, Portugal, Romania, Serb-Croat-Slovene state, and others. The Central Powers, meanwhile, consisted of Germany, Austria-Hungary, the Ottoman Empire, and Bulgaria.

The war lasted until 1918. The Russian Empire formally left the alliance in 1917, signing a treaty of Brest Litovsk which created a separate peace with the Central Powers. Once Russia withdrew, the final great powers in alliance were the French Republic, the British Empire, the United States, Italy and Japan.

Some believe that if it weren’t for World War I, Germany and France would be world superpowers like the United States is today. Dan Carlin of Hard Core History did an in-depth podcast series on World War I, including Ferdinand’s assassination. The series is called Blueprint for Armageddon. You can listen to three hours of the series here.

People have voiced concerns about World War III because, if Russia were to declare war on Turkey, it might cause different countries to fall in line with their allies, similarly to what happened in World War I. Although Turkey is friendly with the U.S. and is a member of the United Nations and NATO, relations between Turkey and the United States have gotten less stable over recent years, starting with the United States’ action in the Iraq War in 2003. Americans’ support of the Kurds in the Syrian Civil War has increased tensions. In March 2016, President Barack Obama refused to have a formal meeting with Erdogan when he visited the U.S. But in September, he did meet with Erdogan for the first time since the failed coup attempt, which some said might have signaled a ‘minor uptick” in U.S.-Turkey relations.

Theoretically, if Russia declared war on Turkey, NATO members might retaliate since Turkey is a member of NATO. However, since Trump seems friendlier with Russia than most administrations, others find it hard to believe that he would declare war on Russia.

So far, Russia has said that it considers the assassination of its ambassador an act of terrorism. There has been no declaration of war, and some experts believe this is nothing compared to what happened in World War I. Michael Koplow, a policy director of the Israel Policy Forum, shared a series of tweets on why he believes this won’t escalate into World War III.

Despite the imagery of a foreign dignitary being assassinated in such a high profile way, we aren't about to have WWIII 1/x

Essentially, he said that Turkey has too many incentives to ally with Russia and use this as an opportunity to strengthen its ties with Russia, not weaken them. Previously strained ties with Russia did not help Turkey, so the country, he said, his more likely to want to put out a statement against extremists and fighting terrorism jointly.

Here are some more tweets being shared online about World War III:

We're tweeting through the beginning stages of World War III…sensational

My point was that this is no reason for world war III or anything like it. It is a simple rebel. Killing is never to be tolerated. https://t.co/ia8PeRAQsM

Loading more stories
wpDiscuz
15
0
Would love your thoughts, please comment.x
()
x
| Reply
Talk of World War 3 is trending after Karlov's assassination. Why are people comparing this to World War I? Learn more here.