An Ontario, Canada woman has been identified as one of the victims of the Reina nightclub terrorist attack in Istanbul.

Alaa Al-Muhandis, a married mother of two, was one of 39 people murdered in the terrorist attack, in which a gunman burst into the nightclub on New Year’s Eve, reported CBC.

She was the only Canadian victim. An American, Jacob Raak, survived the attack.

1. Al-Muhandis Was Visiting a Sick Friend in Jordan

Al-Muhandis’ brother told CBC that the family did not even realize Al-Muhandis was in Turkey. She had gone to Jordan to visit a sick friend, they said.

Her brother, Mohammed, told the television station that he had received a call from her husband confirming the death.

Much of her Facebook page is in Arabic. She did post a recent news story about people gathering in Toronto to remember Baghdad bombings. She also shared music and information on treating women right.

Her husband ran a car dealership named after her, Globe and Mail reported.

2. Al-Muhandis Worked in Event Planning & Was a Young Mother

On LinkedIn, Al-Muhandis wrote that she worked in sales in Milton, Ontario as an event planner. According to the Toronto Star, she ran an “event-décor business, Looloo’s Arrangements.”

A man who knew her professionally told the Toronto Star she wasa “very nice lady, and very helpful and very kind, (with a) very nice personality.”

Her Facebook page says Al-Muhandis studied at Seneca College, went to Streetsville Secondary School, lived in Milton, Ontario, and was from Milton, Ontario.

In a statement to CBC News, her husband, Asal Ahmed, said she was an “outgoing, optimistic and loving person,” who loved traveling.

Conservative leadership candidate and Milton MP Lisa Raitt “expressed condolences to Al-Muhandis’s family and neighbors,” reported the Huffington Post, adding that Raitt wrote, “We never think that something like this can happen to us in Milton.”

3. Those Who Died Were From Many Different Countries

Those killed in the terrorist attack in Istanbul were from 14 countries, including India, Morocco, Jordan, Canada, Russia, Tunisia, Saudi Arabia and Kuwait, CNN reported.

They included a Saudi enterpreneur.

Another Victim of the terrorist attack in Turkey.

Her name is Lubna Ghaznawi.

My condolences to her family. pic.twitter.com/BDe7r87Ftg

A citizen of Israel.

Leanne Nassar had begged her parents to let her go to Istanbul. She was killed in this weekend's nightclub attack. https://t.co/aB1tccRSVh pic.twitter.com/D6mePGMmjA

And many others. Canadian Prime Minister Justin Trudeau mourned the loss of Al-Muhandis, whom he said was a Canadian citizen.

The Globe and Mail reported that she was of Iraqi heritage.

4. The Attack Occurred When a Gunman Burst into the Popular Nightclub 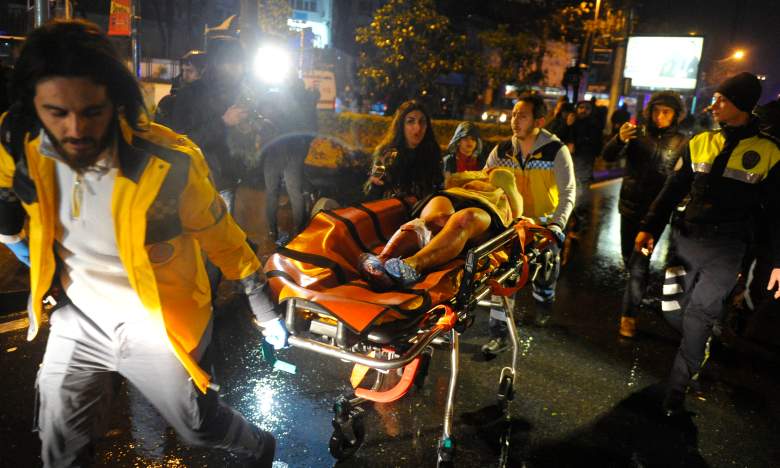 The gunman murdered 39 people, including a police officer, when he burst into the nightclub populated by tourists. ISIS has claimed responsibility for the shooting, although this claim could not be independently verified, reported CNN.

Authorities have released video they say is of the gunman.

The CCTV footage of the gunman who killed 39 people in Istanbul night club attack at 1.15 am on the first day of 2017. #Turkey pic.twitter.com/5YMJK1MX6c

The gunman is still at large.

5. The Wounded American Played Dead to Survive the Rampage

William Jacob “Jake” Raak, 35, a small business owner from Delaware, was the only American injured in the terrorist attack.

He survived by playing dead, and told USA Today that he was lying on the ground when the terrorist shot him in the leg.

His life was probably saved by his cell phone because the bullet hit it first, USA Today reported. The UK Mirror reported that the terrorist was walking on a bench over Raak when he shot him, and Raak was visiting Istanbul when he decided to go to the nightclub.