Allie Dowdle pictured with her boyfriend, Michael, on her Go Fund Me page.

A white Tennessee teenager set up a Go Fund Me page after her dad took away her car and threatened to not pay for college because she is dating a black man. Allie Dowdle from the town of Eads, 30 miles east of Memphis, set up the fundraising page on January 11. It’s titled, “Allie’s Tuition – Say No to Racism.” Since going online, the page has raised $10,650. The goal was $10,000. Dowdle writes that her father, Bill Dowdle, has said he will not pay for his daughter to go to college as long as she remains her with boyfriend, Michael.

Dowdle writes, “My dad did not give me an option: he told me that I was not allowed to see Michael ever again. Why? Strictly because of skin color. It wasn’t a quiet “no,” either. I’ll never forget the yelling my parents did, when they expressed how disappointed they were in me, that I could do so much better. I did not know what to do. I couldn’t comprehend how someone could be seen as less because of pigment. I still can’t comprehend it, and I never will be able to.”

1. Her Dad Says He Cut His Daughter Off Because She Started Dating Michael in Secret

In an interview with the New York Daily News, Bill Dowdle said it’s not his “preference” that his daughter is dating a black man. He added there are “issues” in the South with interracial dating.

Bill Dowdle continued that his problem was that his daughter had started dating Michael in secret. He says that his daughter’s allegations of racism are “a justification and gave her the moral high ground.” Bill Dowdle also believes his daughter is spoiled and that it has become “obvious that she needed to go out in the world and grow up.” He concluded by saying that he and his wife are concentrating on his daughter’s high school graduation this spring. 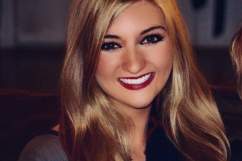 The Tigers draw with No. 6 Syracuse for their eighth shutout of the year and move to 9-2-4. #ClemsonUnited
?: https://t.co/Gt6nynudwO pic.twitter.com/HSb3cyGNVd

On her Go Fund Me page, Dowdle’s boyfriend is only referred to as “Michael.” Heavy.com can reveal that “Michael” is former Philadelphia Union Major League Soccer player Michael Swift. He is attending Clemson University in South Carolina and is a from Memphis, according to his Facebook page. Swift began at the school in August 2016. On January 12, Swift posted a link to his girlfriend’s Go Fund Me page on Twitter.

Excited to announce that I have committed to @ClemsonMSoccer and am looking forward to whatever comes next. #GoTigers

An SB Nation report on Swift says that he joined the Philadelphia Union’s academy in in 2015 following a spell playing for Sunrise SC in Florida.

According to Dowdle’s Go Fund Me page, she has a 4.0 GPA at Hutchison High School, a private school all-girl facility in Memphis. Dowdle also details a two month surgical fellowship she achieved at Regional One Health, a hospital in Tennessee.

Dowdle says her dad has taken away her phone, car and personal savings. In a statement to WMC Action News, a Go Fund Me spokesperson said:

With hundreds of thousands of campaigns, it’s not feasible for GoFundMe to investigate the claims stated by each Campaign Organizer.

Rather, we provide visitors with the tools to make an informed decision as to who they choose to support. While GoFundMe and its payment partners do provide a number of safeguards to deter fraud, we must insist that visitors follow the advice stated on each and every campaign. Only donate to people you personally know & trust.

That statement comes after Dowdle’s fundraising efforts have been met by skepticism by some Go Fund Me users. One commenter, Marissa Kizer, said, “Sending a white girl from a middle-class family to college is not fighting racism. In fact, expecting to avoid work, student loans, etc. and be treated like a hero for dating a black guy seems pretty racist to me.”

Dowdle is a soccer player at Hutchison High School. Her Max Preps page names her as the 37th best player in Tennessee.

Dowdle’s father is the owner of Dowdle Sports & Outdoors in Cordova, Tennessee, according to his Facebook page. The store has mixed reviews on Google Reviews, with some lamenting Dowdle’s poor customer service. The business has been in existence since 1909.

In addition, Bill Dowdle is also a published author with his book, The Art of Duck Calling. The blurb for the book says that “Bill Dowdle shares his expert techniques and really teaches you how to blow a duck call. Dowdle actually teaches the art of duck calling.”

5. Interracial Dating Remains a Hot Button Topic in the U.S.

What Happens When Interracial Couples Get Real About Stereotypes | ComplexA bunch of interracial couples sat down to talk about how stereotypes REALLY affect their relationships. Subscribe to Complex for More: http://goo.gl/PJeLOl Check out more of Complex here: http://www.complex.com https://twitter.com/ComplexMag https://www.facebook.com/complex https://www.instagram.com/complex/ https://plus.google.com/+complex/ COMPLEX is a community of creators and curators, armed with the Internet, committed to surfacing and sharing the voices and conversations that define our new America. Our videos exemplify convergence culture, exploring topics that include music, sneakers, style, sports and pop culture through original shows and Complex News segments. Featuring your favorite celebrities, authoritative commentary, and a unique voice, our videos make culture pop.2015-07-29T15:04:02.000Z

Interracial dating is still a controversial issue in the United States. As news of Dowdle’s story broke, one person wrote to Dowdle on Twitter saying, “The white race is ending incredibly fast because of people like you.” In December 2016, Ebony magazine reported on the backlash suffered by Serena Williams following her engagement to a white man. A November 2016 episode of Blackish dealt with the issue of interracial dating.

While a month earlier, Khloe Kardashian took up the issue on her app saying, “Like who the F cares anymore?! It’s so crazy because we’re all human beings capable of love so why does skin color have anything to do with it?”

Read More
5 Fast Facts, Breaking News, Racism, Weird News
A white Tennessee teenager set up a Go Fund Me page after her dad took away her car and threatened to not pay for college.