The federal judge who granted an emergency stay of part of President Donald Trump’s immigration ban is a former prosecutor nominated to the bench by Barack Obama on the recommendation of Chuck Schumer.

Schumer, the high-profile Democratic Senator, is a family friend of the judge, Ann Donnelly, according to the Brooklyn Daily Eagle. Schumer had called for the executive order’s reversal.

The order for a stay came down on January 28 from Donnelly, a judge based in Brooklyn, according to The New York Times.

Trump’s executive order had created a 90-day ban on all immigration from a series of Muslim majority countries: Iraq, Iran, Libya, Sudan, Somalia, and Yemen. Syrian immigration was banned indefinitely and the order created a 120-day moratorium on all refugees to the United States. Trump denied the immigration ban was a “Muslim ban,” and said he thought it was working well, The New York Times reported. He has said he feels the ban is necessary to review the vetting process and protect the United States from radical Islamic terrorists.

However, the ban was affecting everyone from an Iraqi man who served the U.S. military as an interpreter to people with green cards as protests erupted at airports around the country, where people from the impacted countries were detained.

Nationwide stay has been granted. Applies to everyone nationwide, immigrants and non-immigrants, refugees, etc. affected by EO. #NoBanNoWall pic.twitter.com/vjGkdJkg8a

According to the Washington Times, the judge ruled that implementing Trump’s order would cause “irreparable injury” to some people if they were sent back.

Reported NBC News: “The stay blocks anyone with a valid visa being held at airports from being deported…They do not have to be released from detention.”

The ruling says, in part:

There is imminent danger that, absent the stay of removal, there will be substantial and irreparable injury to refugees, visa-holders, and other individuals from nations subject to the January 27, 2017 Executive Order

According to The New York Times, Donnelly’s ruling means that detainees can’t be sent back to their home countries but she “stopped short of letting them into the country or issuing a broader ruling on the constitutionality of Mr. Trump’s actions.”

The judge also ordered the government to provide a list of all of those detained, NBC News reported.

According to the Hill, the judge’s ruling “affects those who have arrived in the U.S. with previously approved refugee applications or were in transit with valid visas” not those still overseas.

2. Judge Donnelly Is a Former Prosecutor Who Was Born in Michigan

Protests erupted at JFK airport before the ruling. (Getty)

According to her judicial profile, Donnelly is a United States District Court Judge for the Eastern District of New York.

She was born in 1959 in Royal Oak, Michigan. Donnelly has a B.A. from the University of Michigan, B.A., 1981, and a law degree from Ohio State University College of Law, 1984, the New York court website says. Her father was “Vice President of A.O. Smith Corporation and chairman of their electric motor division. A graduate of Notre Dame University, he served as an adjunct professor at Wright State University for over ten years,” his obituary says.

She is married to Michael Toth and has two daughters.

3. Barack Obama Nominated the Judge to the Federal Bench on Schumer’s Advice

The New York courts website says that Donnelly was “nominated by Barack Obama on January 7, 2015, to a seat vacated by Sandra L. Townes.”

The U.S. Senate confirmed her appointment on a 95-2 vote, according to the New York Law Journal.

“Donnelly was nominated to be a federal judge by President Barack Obama on the recommendation of Sen. Charles Schumer,” reported the Brooklyn Eagle.

The newspaper quoted the chief judge as saying after giving Donnelly the oath of office, “We are indebted to Sen. Schumer for recommending Ann Donnelly and all of the other outstanding recent appointments.”

When Donnelly was confirmed, Schumer called her “fair, open-minded” in a news release.

4. Schumer Has Described Himself as a ‘Family Friend’ of Donnelly

According to the Brooklyn Daily Eagle, when Donnelly was sworn in to the federal bench, Schumer spoke at her oath of office, “described himself as a family friend of the Donnelly’s and noted that his daughter played basketball with one of Donnelly’s daughters at St. Savior.”

He said of Donnelly, “I’m so pleased to be here and celebrate this moment in the journey of an exceptionally talented and well-respected jurist, Judge Ann Donnelly,” the newspaper reported.

On Twitter, a few hours before Donnelly’s order, Schumer urged the reversal of Trump’s executive orders. Schumer had attempted to get Donnelly confirmed on “unanimous consent,” according to Law360.com.

These Exec Orders will only serve to embolden & inspire those around the globe who would do us harm. They must be reversed, immediately.

The lawsuit that Donnelly heard was filed on behalf of two Iraqi man who were detained under the executive order, although one was released before her ruling.

Hameed Khalid Darweesh, an Iraqi man who put his life on the line as an interpreter for the U.S. military, praised America as the “land of freedom” after being released from airport detention.

Donald Trump’s executive order on immigration and visas had resulted in the detainment on American soil of Darweesh, 53, and another Iraqi man, Haider Sameer Abdulkhaleq Alshawi.

Darweesh was later released on an exemption in the executive order. Alshawi is an accountant whose wife worked for a U.S. contractor; members of his extended family were killed by insurgents. The lawyers are asking for the suit to be broadened into a class action.

Read more about the men and read the lawsuit here:

These protesters at JFK held signs that read “Christians Against the Muslim Ban.” (Getty)

Major protests ignited at John F. Kennedy airport in New York, as well as at other airports around the country, as word spread that Trump’s immigration ban was leading to the detaining of people with visas.

The protests at JFK focused at Terminal 4. The executive order roped in people who already had visas, including students and professors traveling overseas and blocked businessmen from coming to the United States for planned meetings.

You can read more about those affected by the order here: 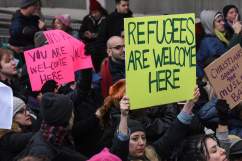 Trump ‘Muslim Ban’: Who Is Being Detained, Impacted?