So why is the trending Twitter hashtag being used to describe the attack #BLMKidnapping? (Police also aren’t sure the incident is actually a kidnapping, as that angle remains under investigation). The hashtag has been used many thousands of times.

It's so crazy how #BLMkidnapping is actually a thing. trending. When it was confirmed no evidence of BLM involvement

#BLMKidnapping is the hashtag to get this story trending. https://t.co/gNaBrifiLm

People then created a new purposely misspelled hashtag #blmkiddnaping because they were worried Twitter was stopping it from trending. That hashtag was also trending.

A police spokesman said June 5 that police think the victim was targeted because of his special needs status, not his race, although members of the group use expletives to refer to white people in the videos. The horrific videos show the suspects, who have yet to be named, making the man drink from a toilet, cutting his hair and sweatshirt, punching and kicking him, and using expletives to refer to Donald Trump and white people.

Charges were announced Thursday against Jordan Hill and Tesfaye Cooper, both 18, and two sisters, Brittany Herring (Covington) and Tanishia Covington in connection with the horrific videos, which have gone viral and been viewed by many thousands of people.

The Cook County State’s Attorney’s Office said they are charged with aggravated kidnapping, aggravated unlawful restraint, aggravated battery with a deadly weapon and residential burglary. They are all also charged with hate crime, a charge police hesitated on committing to Wednesday night. Police had drawn criticism on social media for refusing to outright label the crime as a hate crime during their initial news conference.

The videos (there are more than one) have sparked a racial conflict online, with some accusing the media of downplaying black-on-white violence, but others charging racism for linking Black Lives Matter to black suspects who didn’t even mention it. Police have also not alleged that BLM – which started as a protest movement against police shootings but some have labeled a hate group – was a motivation for the attack.

The Facebook page of Brittany Herring – who streamed the video on her page – and some of the alleged suspects (Chicago police have yet to release their names) – are now filled with overtly racist comments from strangers upset about the videos.

BBC reported that a far-right site called InfoWars got the hashtag started even though the suspects don’t mention Black Lives Matter in the videos. “It was given an initial boost by the conspiracy-minded right-wing site Infowars.com, and its editor-at-large,” BBC reported.

Newsflash: #BlackLivesMatter is an ideology & movement, not a race. https://t.co/HHrKngdtvO

When anti-white racism is so entrenched that it becomes a BuzzFeed/MTV meme, yes it's obviously going to lead to hate crimes. #BLMKidnapping

Alt-right leader Richard Spencer – who led a group that gave the Nazi salute after Trump’s election – has pushed the hashtag on social media, as has a “Pizzagate” conspirator, BBC reported.

It's happening! #BLMKidnapping is trending! Make it # 1! In an epidemic of #FakeNews & hoax hate crimes, real crimes matter more than ever! pic.twitter.com/cYEPUnltRr

If Trump must "disavow" every random Internet troll, then #BlackLivesMatter must disavow every crime or else they support it. #BLMKidnapping

Remember the #blmkidnapping every time some journalist lies about my white advocacy organization and calls it a hate group.

Some are accusing Twitter of trying to downplay the hashtag.

Brittany Herring, who first streamed the video live on Facebook, doesn’t have much political commentary on her Facebook page. She writes about court dates and her life, but doesn’t seem to have a political activist focus.

On Twitter, some are challenging those who have used the hashtag #BLMKidnapping:

Worth ptg out that hashtag #BLMKidnapping is damn sleazy, as these kids had nothing to do w/BLM I can see. Turns out it's a Cernovich ploy.

Can we change the hashtag from this #BLMKidnapping , making it hard to get to the point with this bs narrative. Let down.

I'm not understanding what are they blaming on us now?? #BLMKidnapping

Others believe the media have a double standard:

You can watch the video here: 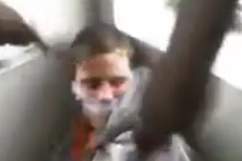 Read More
Black Lives Matter, Breaking News, Chicago
The Brittany Herring streamed Chicago Facebook Live torture video is trending on Twitter with the hashtag #BLMKidnapping. But why is Black Lives Matter in it?