Jenner is on the record as confirming that she considers herself a Republican, as well as a conservative, although she has also criticized the direction the party has gone in the past few years.

The former Olympic star is one of the highest profile celebrities said to be attending the Trump Inauguration, which is on January 20, 2017. Although there were rumors that Trump might dance with Jenner at an inaugural ball, Jenner’s spokesperson told AOL there had been “no discussions” of that at all.

1. Caitlyn Jenner Has Said She’s a Republican Who Supports a Constitutional Government

Jenner explained to a group of Republicans at a brunch during the Republican National Convention that she was a Republican but had some issues with the party’s more recent direction.

“I feel like our best hope to get back to constitutional government with 18 enumerated powers is in the Republican Party,” Jenner said, according to Time Magazine.

“And I have to admit I’ve been very disappointed over the last five or ten years and so I won’t give up hope on it.”

The brunch was organized by “the conservative, pro-LGBT American Unity Fund,” Time reported.

2. Caitlyn Jenner Was Overheard on an Airplane Praising Trump on Transgender Issues

2nd collaboration with @MACcosmetics coming Jan. 5th!! Who's ready to rock 2017? All sexes. All ages. All races. #maccaitlynjenner pic.twitter.com/hHYeCtOE5c

A fellow passenger wrote on Twitter about hearing Jenner praising Trump on a plane to Washington D.C. on January 19, where she was presumably headed to attend the Inauguration.

“Caitlin Jenner is on my flight having a loud conversation about how Trump is great on trans issues lmao,” wrote Siobhan Thompson.

US Magazine reported that Jenner was a “staunch critic of Hillary Clinton and has previously declared her hopes to serve as a ‘trans ambassador’ during the 2016 election, making her a polarizing figure for the LGBTQ community.”

3. Jenner Has Said it Was Harder Coming out as a Republican, Than Trans

According to USA Today, Jenner believes she has found more acceptance from Hollywood as a transgender person than as a conservative.

The newspaper reported that Jenner was “mostly joking” but not entirely.

4. Jenner’s Republican Views Date Back to Her Father’s Military Service

Visiting my mom and she's doing great after breaking both her hips. She's been mobile – she's tough. pic.twitter.com/VcQoPpI7XC

USA Today reported that Jenner’s “political views have much to do with the fact that her father served in the military.”

The newspaper quoted Jenner as saying “and if my dad knew what was going on in this country when he fought so hard, I think he’d be very disappointed.”

Last night my little angel @KendallJenner fulfilled her dream as a little girl to walk in a @VictoriasSecret show! pic.twitter.com/nyJgWPOdzH

A few days before the Inauguration, Jenner wrote on Twitter that she thinks Republicans need help with LGBT issues, and she wants to further their understanding.

Others have criticized Jenner for supporting the Trump administration because of Vice President-elect Mike Pence’s record on LGBTQ issues in particular.

Caitlyn Jenner at the inauguration isn't going to heal things with the LGBT+ community. Not with Mike Pence as Vice President.

You can read more about Pence’s record here: 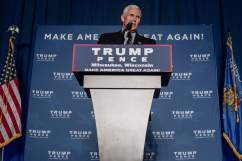