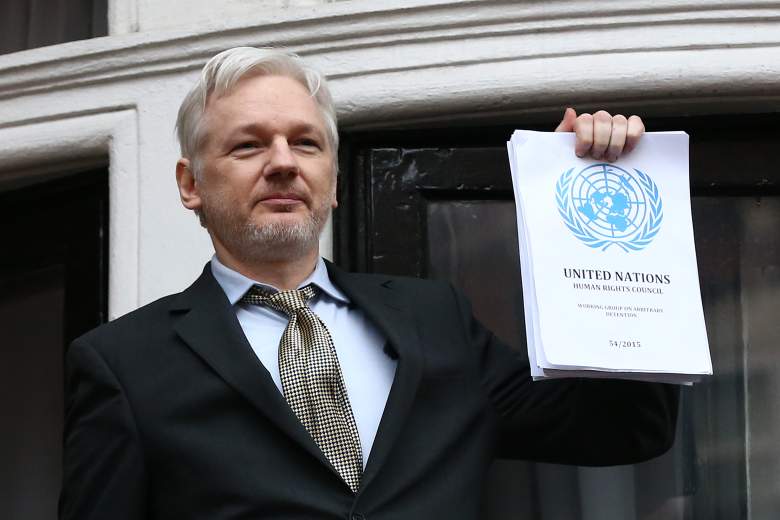 Rumors are starting to circulate that Julian Assange hinted during his interview with Sean Hannity on Fox News that Seth Rich might have been the source of WikiLeaks’ DNC and Podesta emails. However, Assange never actually said this. Whether or not you believe he was hinting at it depends on how you interpret something he said during his interview with Hannity. After you finish this article, take our poll at the end of the story and let us know who you think was the source of WikiLeaks’ information.

At one point, Assange and Hannity are speaking about the news that WikiLeaks was working with Russia to influence the election. Assange pointed out that if you read the government’s statement carefully, they never come right out and say that WikiLeaks was involved. In fact, even the joint analysis report that came out from several intelligence agencies on December 29 never mentions WikiLeaks by name. Assange says this is because they actually don’t have any evidence that WikiLeaks was working with Russia, because they were not. None of WikiLeaks’ information came from the Russian government or state sources, he said.

He goes on to say this statement, which is the source of the newest Seth Rich rumor:

What’s going on? … Number one, they don’t have the evidence that WikiLeaks is involved in that way. Now why am I confident about that? Well because there is one person in the world — and I think it’s actually only one — who knows exactly what is going on with our publications… And that’s me.”

You can watch his statement below, at around the 7:00 mark:

Some are reading a lot into Assange’s statement. They are saying that the source of the WikiLeaks leak would know that Russia wasn’t involved. But since Assange said that he is the only person in the world to know, then the source of the leaks must be dead.

However, others have suggested other interpretations. For example, one is that Assange was talking about how WikiLeaks works and who they coordinate with, and he’s the only person in the world who knows all the underpinnings of WikiLeaks’ operations.

Some are also pointing out that Assange’s interview took place on Seth Rich’s birthday, which may be another hint. Or it could just be coincidence. Rich was born on January 3, 1989.

coincidence that this took place on #SethRich's birthday?

Other statements that viewers are pointing out as possible “clues” include Assange speaking around 16:16 in the video, stating that he does not want to clarify who the source is, whether it is within the U.S., within the DNC, a service provider of the DNC, or outside of the U.S. Some are taking this to point to Rich, who provided services to the DNC. But others say that Assange was simply listing all possibilities.

Others point out to another part of Assange’s interview when he stated that no one came to harm as a result of the WikiLeaks information. They say this is proof that Seth Rich was not the source. However, other viewers point out that Assange was speaking of people who were harmed as a result of the WikiLeaks’ classified information being exposed, and Rich was not part of that context anyway. Others say that because Rich died before the leaks, even if he was the source he wouldn’t be part of Assange’s statement.

Seth Rich, a DNC Voting Analyst, Was Murdered and the Motive and Suspect Are Still Unknown

Seth Rich, 27, was shot and killed on July 10 at 4:15 a.m. in a murder that remains unsolved. Police said there were no suspects or eyewitnesses or an obvious motive. What made the murder so strange was that he may have been a victim of an “attempted robbery,” but his wallet and credit cards were not taken. His father has said that he believed Rich was killed while resisting the robbery, accounting for the bruises on his body and the fact that he was shot at least once in the back. The family has spoken out against attempts to “politicize” his death.

At the time of his death, Seth worked for the DNC, focusing on voting issues. He was a data analyst and was the DNC’s Voter Expansion Data Director, according to his LinkedIn page. WikiLeaks offered a $20,000 reward for information leading to a conviction in Rich’s death. Assange has spoken about Rich’s death before, neither confirming nor denying that Rich was the source. (But WikiLeaks makes it a policy to never reveal its source.) Some of Assange’s statements, especially during an interview with Dutch TV station NOS, gave fuel to the rumors. Assange spoke about Rich’s death and said, “Whistleblowers go to significant efforts to get us material, often very significant risks. There’s a 27-year-old that works for the DNC who was shot in the back, murdered, just two weeks ago, for unknown reasons as he was walking down the street in Washington… I am suggesting that our sources, ah, take risks and they, they become concerned to see things occurring like that…”

The bottom line is that there was no concrete evidence provided in Assange’s interview with Hannity that Rich was the source. In fact, Assange was very careful to repeatedly say that he was not going to reveal the source and he only wanted to make clear that the information was not from the Russian government or a state actor.

Do you think Assange was hinting about Seth Rich? Let us know in the comments below, and then take our poll about who you think the source of the leaks was:

To read more about theories regarding WikiLeaks’ source, see our story below.

Loading more stories
wpDiscuz
7
0
Would love your thoughts, please comment.x
()
x
| Reply
During his interview with Sean Hannity, did Julian Assange hint that Seth Rich was the source of the DNC leaks? See theories and video of what Assange said.