CNN host Don Lemon was the talk of Twitter after he got his ear pierced on television during the New Years Eve 2017 bash. The Hollywood Reporter reported that Lemon was broadcasting from a New Orleans bar at the time.

He seemed pretty happy to a lot of people too, with Twitter speculation running rampant that Lemon was drunk. Watch above. Lemon’s co-host Brooke Baldwin wrote on Twitter that the CNN host was drinking tequila.

Nah. ONE of us is shooting tequila and his name is @donlemon https://t.co/80dW12Imiv

@donlemon is already out of control!! @BrookeBCNN – Take away his shot glass! ?? pic.twitter.com/fom1WKsLbG

CNN finally pulled Lemon’s mic when he started to say 2016 was an awful year.

It seems @donlemon, @BrookeBCNN got the #CNNNYE party (and the drinking) started a little early down in New Orleans https://t.co/vSI1sy9oXk

The weird moment was surpassed only by Mariah Carey’s disastrous turn on stage, in which she appeared to just wander around and do her own thing.

“Ok tell them what’s going to happen. I’m going to get something,” says Lemon, starting out the weird appearance.

At one point, Lemon was torn between a tattoo and a piercing.

“Kathy what should I do?” he asks Kathy Griffin.

Lemon then starts taking off his shirt on TV and is implored to “keep it closed.” Then, he decides to get his ear pierced.

“Can we please not give him shots btw?” his obviously concerned co-anchor, Brooke Baldwin, suggests.

“Don’t get blood on my jacket,” Lemon says.

Some people thought Lemon was a breath of fresh air amidst too many staged performances.

Kathy Griffin is like the drunk obnoxious girl at the bar who thinks she's hysterical. Brink back Don Lemon – he was great. #CNN

However, others thought he was one of the train wrecks of a night that saw a few. 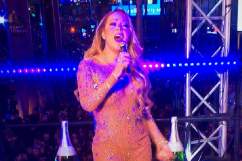