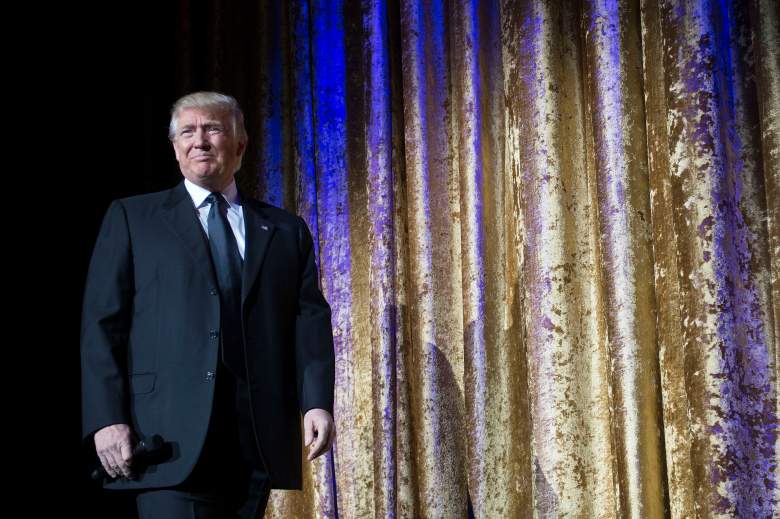 Donald Trump delivers remarks at the Chairman’s Global Dinner at the Andrew W. Mellon Auditorium in on January 17, 2017. (Getty)

A number of inauguration galas will be held in Washington, D.C. this week, but President-elect Donald Trump will only be attending three of them. Which are the official inaugural balls that Trump will be going to, and when do they take place?

The Presidential Inaugural Committee announced this week that Donald Trump and Mike Pence will be attending the Liberty Ball and the Freedom Ball, which will both take place at the Walter E. Washington Convention Center on the evening of Friday, January 20th. Though they’re in the same building, those are two separate events occurring at the same time on different floors of the convention center.

For those who do not have tickets, both the Liberty Ball and the Freedom Ball will be streaming online and will be broadcast on cable news. They are both expected to last about two hours.

The following entertainers have been lined up for the Liberty Ball and the Freedom Ball: Sam Moore, Tim Rushlow and his Big Band, Silhouettes, The Rockettes, Pelican 212, The Piano Guys, Circus 1903, Cache Olson, Lexi Walker, and Erin Boheme.

The third inaugural ball Trump will attend is the Salute to Our Armed Services Ball. This one will take place at the National Building Museum. Tony Orlando and Josh Weathers will be performing at this event. This gala is not open to the public, and only a limited number of tickets were given out. Many of the guests will be veterans, military families and first responders.

These are the only “official” inaugural balls that Donald Trump and Mike Pence will personally attend. There are a number of other galas taking place around Washington D.C. on Friday night, however, including DeploraBall, a gathering of members of the alt-right.

Previous presidents have traditionally attended a larger number of inaugural galas. In 2009, Barack and Michelle Obama went to a total of 10 inaugural balls, and in 1997, Bill Clinton went to 14 galas. On inauguration night, the president and the first lady would typically spend a brief amount of time at each gala, usually dancing at least once before moving to the next event.

Although Donald Trump has been known to be a showman, he brushed off the notion that he’d want to attend so many galas.

Trump said in an interview with Fox and Friends this week, “They had many balls. They had like 10, 12 balls, and we had that scheduled…we have one ball, I think it’s 25,000 people, and they’re going to be bigger…but who wants to have like 10 different balls?”

We don’t currently have an exact start time for any of these inaugural balls, but they will be taking place sometime in the evening on Friday. Check back in on Friday night for a live stream of the inaugural galas.

Read More
Donald Trump, Politics
wpDiscuz
1
0
Would love your thoughts, please comment.x
()
x
| Reply
A number of inaugural balls will be held in Washington, D.C. this week, but which ones will Donald Trump and Mike Pence be attending?