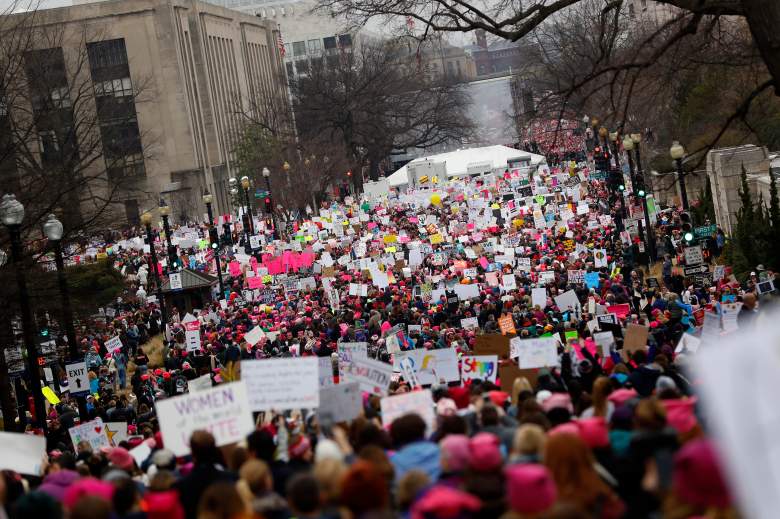 Protesters gather during the Women’s March on Washington January 21, 2017 in Washington, DC. (Getty)

More than three million women and men from around the world took part in the Women’s March on January 21, including seven continents and more than 600 individual sister marches. But it was all connected to the biggest march: the Women’s March located in Washington D.C. The march began in the morning the day after President Trump was officially inaugurated as President of the United States. Exactly how many people attended the march in D.C.? Although an exact count isn’t known, early estimates may indicate as many as 500,000 (a later estimate put the number at 485,000), with worldwide estimates exceeding 3 million. The turnout could be record-breaking. (To see photos from the Women’s March in D.C. and photos from around the country and the world, please see Heavy’s story here.)

The National Park Service never gives official estimates for D.C. turnouts any more, so turnout estimates aren’t an exact science. The National Park Service stopped giving official estimates ever since a dispute about how many attended a Million Man March in 1995. The Park Service was threatened with a lawsuit when they estimated 400,000 showed up to the Million Man March, while organizers believed that one million were there. After that, they stopped publicly releasing estimates. Now, estimates are given by law enforcement officials or federal officials, or organizers.

A city official from Washington estimated that the turnout is at 500,000, The Los Angeles Times reported, with later estimates putting the number around 485,000. The permit originally given for the event had estimated 200,000, but even the D.C. homeland security chief said he thought more than that would turn out.

The estimated turnout, is record-breaking in many ways, although it wasn’t the largest turnout in history. In 2000, a Million Mom March in D.C. had an estimated 750,000 in attendance, Time reported.  And an anti-Vietnam protest on November 15, 1969, is often cited as one of the largest in D.C. with an estimated turnout of 500,000 to 600,000. It was the first nationwide moratorium march to end the war. As stated earlier, some believed the Million Man March had an even bigger turnout of close to 800,000 or more, but the official number given was 400,000.

But the largest demonstration in any city, according to many estimates, still goes to one held in 1982. On June 12, 1982, an anti-nuclear march in New York City attracted an estimated one million people.

Meanwhile, other Women’s Marches across the country also had a large turnout. Officials estimated at least 250,000 in Chicago and as many as 400,000 in New York City. Chicago’s was so long that the march was turned into a rally because there were so many people already in the streets, showing their support. There may have also been 450,000 in Los Angeles.

To see photos of the Women’s March, see our story below.

Loading more stories
wpDiscuz
14
0
Would love your thoughts, please comment.x
()
x
| Reply
The Women's March on Washington in D.C. had a record turnout. Find out how many were at the #womensmarch and how the size compares to other demonstrations.