THANK YOU for another wonderful evening in Washington, D.C. TOGETHER, we will MAKE AMERICA GREAT AGAIN?? pic.twitter.com/V3aoj9RUh4

As TMZ reported, the song for Donald Trump’s first dance as President of the United States with First Lady Melania was ‘My Way.'”

The song, originally sung by Frank Sinatra, was performed by Erin Boheme, Nickie Conley and Jason Eskridge. The trio is from Nashville, Tennessee.

Paul Anka is the original writer of the song, and was asked to perform the melody over Inaugural weekend, TMZ reported. However, he “had to back out because of a custody trial and medical issues.

You can watch video of the dance above which President Trump tweeted. He captioned the video, “THANK YOU for another wonderful evening in Washington, D.C. TOGETHER, we will MAKE AMERICA GREAT AGAIN.”

Anka changed the lyrics and personalized the song for Trump years ago. However, it is believed that the version of “My Way” for the first Inaugural dance will be the original.

Twitter users are talking about the song’s lyrics, especially the first line which reads, “And now, the end is near:”

Trump's first dance at Inaugural Ball will be to Frank Sinatra song "My Way". Ironic since the first line is "And now, the end is near". pic.twitter.com/EKXjugqcmK

Trump and wife plan to dance to the song "My Way" at the inaugural ball. I'd like to remind you of the first two lines of that song => pic.twitter.com/3gWN6GMWEq

So apparently he hasn't read the lyrics…or maybe he has. https://t.co/2vfZMjwGOM 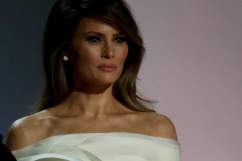 The Inaugural Committee confirmed that Trump will attend two official balls, the “Liberty and Freedom: The Official Presidential Inaugural Ball,” and the “Salute to our Armed Services Ball.”

Loading more stories
wpDiscuz
7
0
Would love your thoughts, please comment.x
()
x
| Reply
President Donald Trump and First Lady Melania Trump will 'have their first dance at the inaugural ball to 'My Way,' sung by a trio of singers out of Nashville, TN. Get all of the details here.