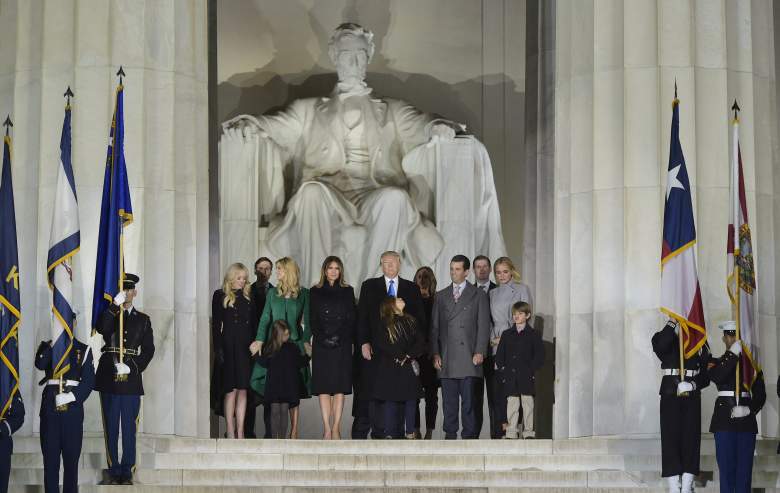 Donald Trump’s inauguration festivities continue on Friday, January 20 with a swearing-in ceremony, inaugural balls, and other events. There are many activities and events happening both before and after he becomes the 45th President of the United States today. We have a complete list of what’s going to happen, both official events and unofficial events.

Trump will stay at Blair House, per tradition. Prior to the swearing-in ceremony, Trump will attend a church service at St. John’s Church. He will also have coffee with President Barack Obama, as is tradition on inauguration day.

The swearing-in ceremony begins at 9:30 a.m. Eastern with musical guests performing (but security screening gates open starting at 6 a.m.) Opening remarks begin at 11:30 a.m. Trump’s actual swearing in won’t happen until noon, and then he will deliver his inaugural address. The event will take place on the West Front of the U.S. Capitol Building and Supreme Court Chief Justice John Roberts Jr. will swear Trump in. The Mormon Tabernacle Choir and Jackie Evancho will perform at the ceremony.

General admission for areas west of Fourth Street NW don’t require tickets. But tickets will be needed for special viewing areas within about a half-mile of the event. You can see a program for the event here.

Here’s exactly what’s going to happen during the swearing-in ceremony:

Departing of the Outgoing President

After the swearing-in ceremony, Trump will attend an Inaugural Luncheon at the Statuary Hall. This luncheon is hosted by the Joint Congressional Committee on Inaugural Ceremonies. It’s a tradition that dates back to 1897, although it didn’t begin in its current form until 1953.

? Street closures begin at 3AM on Thurs. 1/19 including Pennsylvania Ave and Capitol Hill #Inaug2017 #Inauguration https://t.co/ADpNlNHVg0

The Inaugural Parade will begin at 3 p.m. Eastern and last until 5 p.m. It will start at the steps of the Capitol Building and proceed down Pennsylvania Avenue to the White House. The parade will feature six national groups and 34 local groups, including Talladega College’s marching band and the Rockettes, Newsweek reported. Expect about 8,000 performers in the parade. You can view the parade route here.

Here’s a map of the Inaugural Parade route:

Beginning at 7 p.m. Eastern, a number of inaugural balls will take place on Friday night, lasting until around 11 p.m. Eastern. Three of these are official inaugural balls that Trump will be attending: a Salute to Our Armed Services Ball at the National Building Museum, and two balls at the Walter E. Washington Convention Center: the Liberty Ball and the Freedom Ball.

On Friday night, a number of unofficial Inaugural balls will also be taking place. Trump won’t be attending these, but they will still be a lot of fun. Many of these were shared courtesy of Donald Trump’s supporters on Reddit. If you see anything here that we missed, please let us know in the comments below. (All times are Eastern.) A few of the inaugural balls still have tickets available, but not many.

7:00 p.m. – Native Nations Ball, National Museum of the American Indian (Deadline for getting tickets was Jan. 19)