An Oregon man is accused of threatening his wife with a homemade medieval weapon he nicknamed the “clown tickler,” police say.

Matija Belavic made the mace-like weapon, a baseball bat with spikes at the end, to show his two children he could protect them from evil clowns, KGW-TV reports.

But the Washington County Sheriff’s Office says the 31-year-old Cornelius resident turned the “clown tickler” against his family Saturday night while angry with his wife.

Investigators said they believe alcohol played a factor in the incident.

1. Belavic Became Angry Because He Wanted to Go to a Bar to Drink More, but His Wife Wouldn’t Give Him Money or Their Car Keys, Police Say

Belavic with his wife. (Linkedin)

Police said they believe Matija Belavic was drunk when the fight with his wife began Saturday night. She called the Washington County Sheriff’s Office for help about 8:30 p.m., telling them he had threatened her with the mace-like weapon, KGW-TV reports.

The sheriff’s office told the news station that Belavic wanted to go to a bar to drink more. But his wife would not give him money or the car keys, so he became angry.

He then retrieved his nail-filled baseball bat to intimidate his wife, The Oregonian reports.

Police said Belavic did not swing the weapon at his wife, but did hold “it in a threatening manner.”

2. He Was Charged With Menacing & Police Say He Damaged the Family’s Home by Raking Windows With a Pitchfork & Breaking Down a Door

According to KGW-TV, Belavic also damaged his family’s house while angry with his wife.

He raked windows with a pitchfork and then broke down a door he thought was locked, the Washington County Sheriff’s Office said.

Belavic left the house before police arrived, but he was arrested about 15 minutes later on a charge of menacing when deputies found him walking down the street, The Oregonian reports.

It is not known if his two children were home at the time of the incident.

3. He Made the ‘Medieval Weapon’ During the Social Media Freakout Over Creepy Clowns, Which Included Sightings in Oregon

Police said Belavic made the bat, which has 8-inch nails protruding from the top, in October, during a nationwide social media scare over creepy clowns, The Oregonian reports.

He wanted to reassure his two children that he could protect them from an evil clown attack, according to police.

Sightings of scary clowns were reported across the United States, and several arrests of people accused of causing disturbances were made.

There were multiple incidents involving clowns in Oregon during the Fall scare, including in Redmond, Oregon, in September, and in Portland in October.

Also in October, a 55-year-old man was arrested after police said he wore a clown mask outside a middle school in Portland.

4. Belavic Is a Croatian-Born Construction Worker Who Grew Up in Maryland

Belavic was born in Croatia and went to high school in Maryland, according to his Facebook page.

Belavic works in construction as a project manager, according to his Linkedin profile.

“No one and everything. Able to detect bs before a fastest quarter mile. Anything is possible=fun life,” he wrote in his Facebook “About Me” section.

5. He Is Being Held on Bail in the Washington County Jail

Belavic was arrested on suspicion menacing, according to The Oregonian. He was booked into the Washington County Jail and held on $25,000 bail, the newspaper reports.

Online records show Belavic is now facing a charge of unlawful use of a weapon and his bail has been reduced to $2,500. He was still in custody at the Washington County Jail on Tuesday.

Unlawful use of a weapon is a class C felony punishable by up to 5 years in prison, according to Oregon state law.

It is not known if he has hired an attorney, or if he has appeared in court yet. 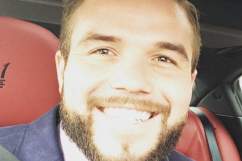