A Philadelphia police officer is on desk duty after this incident caught on tape. (Facebook screenshot)

A Philadelphia police officer is on desk duty and facing an investigation after a video of knocking a teen girl to the ground and punching her repeatedly was posted on social media.

The video, posted on Instagram Monday, shows the unidentified female officer hitting the unnamed 16-year-old girl several times. Police said the officer had responded to a street fight, and the teen girl admitted to slapping the officer, KYW-TV reports.

If we do something wrong we are all over the news. What makes this cop so different? No matter the circumstances this was unnecessary. #nbc10 #abc6 #cbs3 #fox29 @fox29philly @nbcphiladelphia @nbc10morningteam @6abcactionnews @cbs_philly @philadelphiapolice215 @philadelphiapolice #policebrutality

The officer has been placed on administrative duty while the incident is investigated by the department’s internal affairs division, Philly.com reports.

The incident occurred about 2:45 p.m. Monday in the 1300 block of South 54th Street, according to police. About 30 people were involved in the fight.

A longer version of the video shows part of the fight before police arrived:

The 16-year-old girl was hospitalized and then questioned by police with a guardian present, according to Philly.com. Ross said her version of events is “virtually identical” to those of the officer. She is facing charges including assault on police and disorderly conduct.

The officer suffered bruises to her right eye and cheek, and a knee abrasion, but did not go to the hospital, police said.

You can read the full police statement on the incident below:

The 16-year-old defendant involved in this incident was interviewed in the presence of her guardian and informed investigators that she attempted to interfere with officers as they were attempting to arrest one of the individual engaged in the fights.

Eventually the defendant was brought under control with the assistance of other responding uniformed officers. The officer sustained bruising to her right eye and cheek along with abrasions to the right knee but chose not to go to the hospital at this time.

Asa Khalif, of Black Lives Matter Pennsylvania, called the video “explosive” in an interview with PhillyVoice.com.

“The officer has a reputation for specifically getting in black girl’s faces in a ‘you think you’re bad, I’ll show you what bad is’ way,” he told PhillyVoice. “Maybe she should quit the force and join the WWE or MMA since she thinks she’s the black Ronda Rousey. You can see that spirit in her when things started escalating again.” 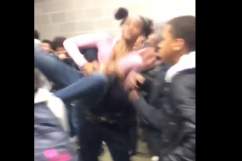 Loading more stories
wpDiscuz
6
0
Would love your thoughts, please comment.x
()
x
| Reply
A Philadelphia police officer is being investigated after a video was posted online showing her hitting a teen girl multiple times while breaking up a street fight.