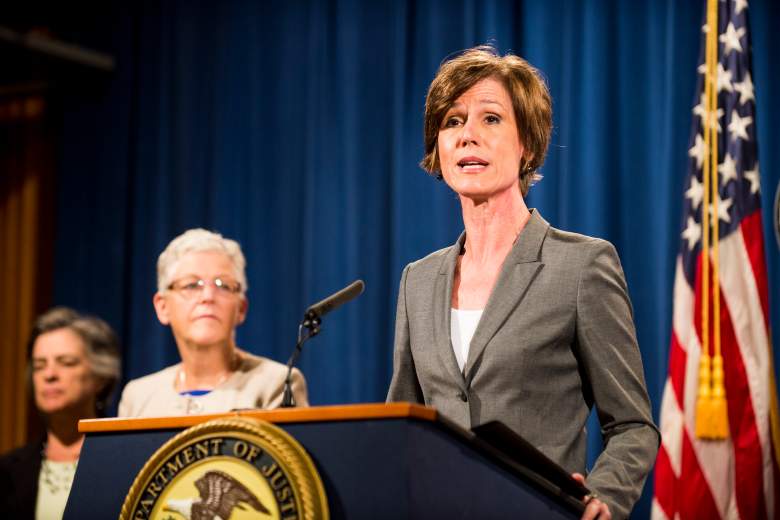 Sally Yates speaks during a press conference at the Department of Justice on June 28th, 2016. (Getty)

Accusing her of betrayal, President Donald Trump has fired his Acting Attorney General Sally Yates, who was standing in outright defiance against Trump’s executive order on immigration.

Yates, a Barack Obama appointee, had written an extraordinary letter by historical standards, telling Justice Department lawyers not to defend the Trump executive order, which has spurred protests at airports throughout the country, according to CNN.

Here’s the White House statement on the firing of Yates, who was replaced by Dana Boente, the U.S. Attorney for the Eastern District of Virginia:

Statement on the Appointment of Dana Boente as Acting Attorney General

Ms. Yates is an Obama Administration appointee who is weak on borders and very weak on illegal immigration.

It is time to get serious about protecting our country. Calling for tougher vetting for individuals travelling from seven dangerous places is not extreme. It is reasonable and necessary to protect our country.

Tonight, President Trump relieved Ms. Yates of her duties and subsequently named Dana Boente, U.S. Attorney for the Eastern District of Virginia, to serve as Acting Attorney General until Senator Jeff Sessions is finally confirmed by the Senate, where he is being wrongly held up by Democrat senators for strictly political reasons.

“I am honored to serve President Trump in this role until Senator Sessions is confirmed. I will defend and enforce the laws of our country to ensure that our people and our nation are protected,” said Dana Boente, Acting Attorney General.

Yates had written a letter to Justice Department employees earlier in the day, saying they could not legally defend the executive order and questioned its legality.

This is the Yates’ letter that sparked her firing:

“My responsibility is to ensure that the position of the Department of Justice is not only legally defensible, but is informed by our best view of what the law is after consideration of all the facts,” Yates wrote in the letter to lawyers at the Justice Department, according to The New York Times.

When Yates’ letter leaked on January 30, people wondered whether Trump could and would fire Yates – the Attorney General of the United States. The answer was, yes, he could – and he just did, within a few hours.

According to CNN, writing a few hours before the firing, “The White House could choose to fire Yates and install someone who will carry out the administration’s priorities, but it did not immediately respond to a CNN request for comment.” Before the firing, the president did tweet on the topic, though, calling Yates an “Obama AG.”

The Democrats are delaying my cabinet picks for purely political reasons. They have nothing going but to obstruct. Now have an Obama A.G.

However, The New York Times highlighted a possible wrinkle in Trump firing Yates. “She is the only one authorized to sign foreign surveillance warrants, an essential function at the department,” The Times reported.

Yates was not likely to hold her position for long anyway, so Trump could have decided just to wait it out.

Yates was only the acting AG until/if Trump’s nominee Jeff Sessions takes over the position. Now that’s true of her replacement. Then, it’s Sessions’ decision, and no one expects him to split from Trump on the issue. The Senate Judiciary Committee has a scheduled hearing on Sessions’ confirmation Tuesday. According to USA Today, some Democrats are demanding that Sessions reveal his position on the immigration executive order before the Senate votes.

According to her Justice Department bio, “Sally Q. Yates was confirmed as Deputy Attorney General on May 13, 2015. President Obama formally nominated her for the position on January 8, 2015.” She is a former U.S. Attorney from Georgia. 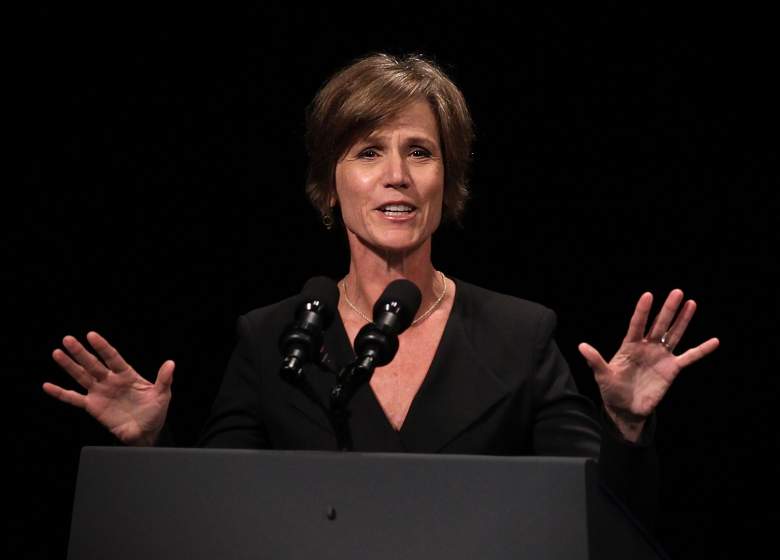 The New York Times reported that Yates’ letter questioned the legality of the executive order, which temporarily bans immigration from six Muslim-majority countries, and indefinitely bans immigration from Syria. The executive order has sparked protests at airports throughout the United States after it initially resulted in the detention of some green card holders and people granted asylum. The government has now clarified that it doesn’t apply to green card holders.

A lawsuit was filed on behalf of two Iraqi men detained and released. It argues that the order is unconstitutional, contending it singles out Muslims, in part because the order grants preference to those from minority religions. Reuters is reporting that the government has “granted waivers to let 872 refugees” into the United States since Trump’s executive order, which has a case-by-case exemption procedure. The sudden nature of the order had caught many people by surprise and led to confusion. Trump has said the measure is necessary to weed out Islamic radical terrorists and has denied it’s a Muslim ban, pointing out that citizens of many Muslim-majority countries are not covered by the ban.

According to the Guardian, Yates had “control over the justice department’s immigration litigation office.”

Ironically, when the U.S. Senate confirmed Yates as deputy attorney general in 2015 on a 84-12 vote, Republican opposition centered around anger “over President Barack Obama’s executive actions on immigration,” Politico reported.

Speaking out against her? Jeff Sessions. According to Politico, the Republican senator from Alabama “urged his colleagues to defeat Yates. Sessions…objected to what he said was her involvement in defending the federal government against a lawsuit 26 states have filed challenging unilateral actions Obama took in November to grant millions of illegal immigrants quasi-legal status and work permits.” Sessions called it “presidential overreach,” according to Politico.

According to USA Today, Trump’s executive order “had been reviewed by the Justice Department Office of Legal Counsel before it was issued Friday. The OLC, whose authority narrowly addresses the form and whether the order is narrowly drafted, approved the order.” However, according to the newspaper, Yates wrote that the OLC did not review whether the order was “wise or just.”

On Tuesday, Trump will announce his Supreme Court nominee. Read more about that here:

You can read more about Sally Yates here: 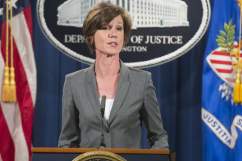 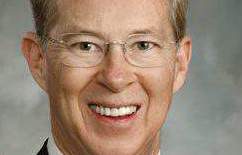