President Donald Trump’s Press Secretary Sean Spicer became a news story himself when he incredibly claimed that the new president’s inaugural viewing audience was the biggest in history.

Spicer immediately launched into an angry barrage at the media in the same press conference, in which he didn’t take questions. “Some members of the media were engaged in deliberately false reporting,” he alleged, before making statements that aerial photos contradict. Not surprisingly, then, the former Republican National Committee press spokesman found himself the butt of jokes and the subject of Twitter memes.

However, despite the joking around, many people felt the Spicer comment was a big problem and a bad warning sign.

Or just not worth talking about at all.

We have more pressing matters than debating the attendance at Donald Trump's inauguration. #SpicerFacts

What Spicer actually said is this: “This was the largest audience to ever witness an inauguration — period — both in person and around the globe.” According to Politico, there’s no real way to calculate global viewing audience but “at least four previous presidents drew bigger domestic TV audiences than Trump.” CBS reported that Nielsen ratings show about 30.6 million people watched the Trump inauguration, compared to 38 million who watched Obama’s. And then there are those shots of the Mall:

Spicer also said “no one had numbers.”

He claimed that photographs of the inaugural proceedings were “intentionally framed” to minimize “the enormous support that had gathered on the National Mall.” He said it was the first time that floor coverings were used to cover the grass on the Mall, highlighting areas where people were not standing. But it wasn’t the first time floor coverings were used; CNN reported they were used for Obama’s 2013 Inauguration.

The hashtags #SpicerFacts and #SpicerSays were created to mock Spicer, whose press conference came the day after Trump was sworn in as the nation’s 45th president.

Here are some of the best/funniest Sean Spicer memes and Tweets. Many of them came up with statements that were prima facie ridiculous.

That wasn't a crowd at the Obama inauguration. It was people-colored grass. Period. #SpicerFacts pic.twitter.com/HzUFaBSovd

"The Matrix Revolutions and Reloaded in no way diminished the power of the original." #SpicerFacts pic.twitter.com/l44KCjqTNo

It's a natural tan. Period! #SpicerFacts

#SpicerFacts
This hashtag is an oxymoron.

Some compared Spicer to Baghdad Bob, the infamous Iraqi propagandist.

More than before we will have to deal with the "truth" according to Sean Spicer / @POTUS / @realDonaldTrump #SpicerFacts #Spicerbriefing pic.twitter.com/h2BTkwJOTk

Milli Vanilli sang all their own songs, they were up against the rigged mainstream music industry. Fact. #spicerfacts pic.twitter.com/pYZeIicDBC

I can throw a football over them mountains. Period.

Record-breaking turnout this morning for emptying compost. Best ever. Crowd right back to the skanky dead chives #SpicerFacts #Inauguration pic.twitter.com/nRdH88CM0U

Can White House Press Secretary Tool come meet with me and my trainer to let trainer know I lost 40lbs since last meeting? #SpicerFacts

"The President successfully built the wall and the Mexican government did in fact pay for it"#SpicerFacts pic.twitter.com/bzrXGfZBZc

The media waited to take photos until everyone left their seats to go to the bathroom and get snacks. #SpicerFacts pic.twitter.com/aczfD7y99S

"Donald Trump has the biggest hands of any President in history. Period." #SpicerFacts pic.twitter.com/tnSyOUspmR

Melania was not wearing Marigold rubber gloves to the inauguration #SpicerFacts pic.twitter.com/O2D8s4eru6

"I think the person with the mushroom hat was mistaken. The princess is in fact here in this castle"#SpicerFacts pic.twitter.com/Ez0PZHEr8x

"Donald Trump has the biggest penis of any President since William Howard Taft. Period." #SpicerFacts pic.twitter.com/ROgTy5O3X4

This was the counter punch: 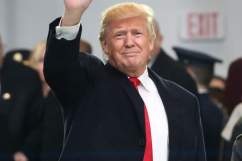