After serving as his Vice President for eight years, President Barack Obama surprised Joe Biden on January 11 by presenting him with the Presidential Medal of Freedom, the nation’s highest civilian honor. The tearful moment came during a ceremony at the White House to honor Biden’s life-long service to the country.

“For the final time as president, I am pleased to award our nation’s highest civilian honor, the Presidential Medal of Freedom,” Obama said, later referring to Biden as his “brother.”

As Obama said that, Biden turned to look away from the audience to wipe tears from his eyes. It came as a complete surprise, even to him.

In his speech after receiving the medal, Biden said he had no inkling of the medal presentation and thought it was just going to be a “toast” to their time in office.

Earlier in the week, Obama also honored Biden during his farewell address in Chicago. Biden was there and hugged the president after he delivered the speech.

“To Joe Biden, the scrappy kid from Scranton who became Delaware’s favorite son: you were the first choice I made as a nominee, and the best,” Obama told Biden during the farewell address. “Not just because you have been a great Vice President, but because in the bargain, I gained a brother. We love you and Jill like family, and your friendship has been one of the great joys of our life.”

Biden and Obama were both Senators and ran for the Democratic Party presidential nomination in 2008. Obama picked Biden to be his vice president and he served in the role for all eight years. The 74-year-old Biden was first elected to the U.S. Senate to represent Delaware in 1973 and remained in the Senate until 2008. There was speculation that he might run for President in 2016, but after the death of his son Beau Biden, he opted to retire from public service instead.

On January 10, Biden announced on Twitter that he plans to leave Washington on January 20 the same way he traveled there for 44 years: by train.

Jan 20, Jill and I will head home to Delaware the same way I have for 44 years: by train. Serving this country has been our greatest honor. pic.twitter.com/D0g2rEvE9R 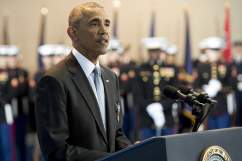