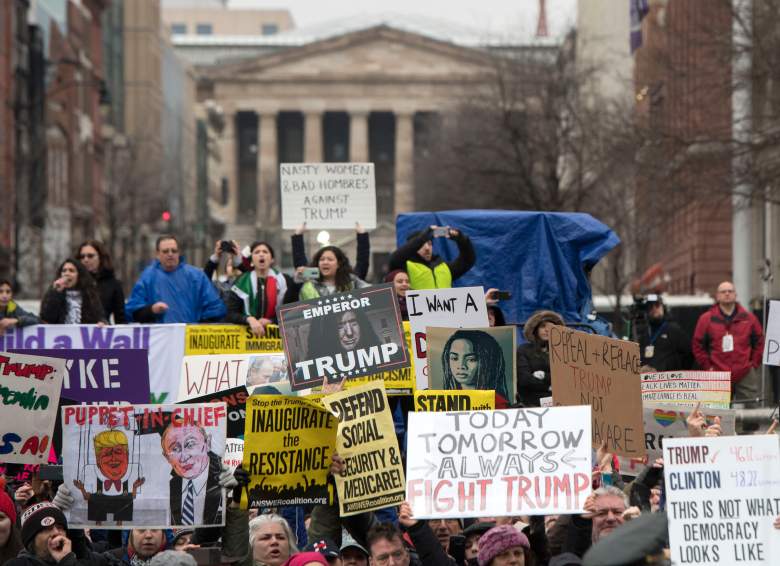 Protesters demonstrate as Donald Trump and Melania Trump walk in the inaugural parade on January 20, 2017 in Washington, D.C. (Getty)

Hundreds of thousands of Americans are protesting President Donald Trump in Washington, D.C. today, including some major Hollywood celebrities.

Many of the celebrities who are marching have been vocal in their opposition to Donald Trump and endorsed Hillary Clinton during the presidential election. They include actors like Evan Rachel Wood, Constance Wu, Scarlett Johansson and Lupita Nyong’o, in addition to musicians like Cher and Katy Perry. Filmmaker and activist Michael Moore is also marching, and, of course, some politicians are participating as well, including New Jersey Senator Cory Booker.

The Women’s March on Washington’s official start time was 10:00 a.m., and the event is expected to last into the late afternoon. Similar protests are also occurring around the country, with major ones taking place in Boston and New York City.

Here are some photos of celebrities at the Washington, D.C. march. This post will be updated as more pictures come in.

Had no phone reception all day. My feet hurt but worth it. #womensmarch pic.twitter.com/yyKi8NA1th

Katy Perry has arrived at the #WomensMarch in Washington D.C.! She looks stunning. pic.twitter.com/FBuqWY3oJl

No matter where you were today… We sent a powerful message! https://t.co/vj0j1Xvxvy #WomensMarch #WhyIMarch #WomensRightsAreHumanRights pic.twitter.com/wd8wM7D5hV

Scarlett Johansson speaking about her support for Planned Parenthood at #WomensMarch #WomensMarchOnWashington pic.twitter.com/l1XBZBFQ0H

We rise We Shine! LOVE HAS ALL THE RIGHT MOVES! @GillianHardG and Abby& me too! #IStandWithPP #marchonmain pic.twitter.com/RZcQIOeObX

Oh just out for a casual stroll pic.twitter.com/cnIzLde1Xc

Oh no big deal. Just @JohnKerry marching with us in DC. 10 feet away from me. #WomensMarch pic.twitter.com/NbatcLnwOd

When you turn around and see @CoryBooker at the #WomensMarch pic.twitter.com/8JwnKW5WXO

Shout out to @CoryBooker for volunteering a selfie w my family @ #WomensMarch. #Imarchfor them & #Humanrights & #PressFreedom pic.twitter.com/U7pOjRNrbJ

Outside of Washington, there are dozens of other protests taking place all across the country, with some celebrities showing up to the one in Park City, Utah.

. @johnlegend out here… With his security, too! #sundance #marchonmain pic.twitter.com/HLxIYjZ4FM

Read More
Breaking News, Donald Trump, Politics
Thousands of Americans are protesting President Donald Trump in Washington, D.C. today, and they will be joined by some Hollywood celebrities.