Protests spiraled into unrest in Anaheim, California over a video that captured an off-duty Los Angeles police officer shooting at a teenager.

The Orange County Register reported that the protest into the video started out peaceful but “devolved” into unrest involving several hundred people. Arrests were made when some people refused orders to disburse late on February 22.

Protests or just looking to cause trouble? ? #protests #Anaheim pic.twitter.com/XSZFQefSjN

At one point, protesters even jumped on the back of a moving semi-truck.

Anaheim protesters jumping onto back of moving semi truck pic.twitter.com/KFWqCnNOwg

Some of the imagery was disturbing.

I went to the #protests in #Anaheim to get a first person experience. This is what I saw pic.twitter.com/G0uUHg4idt

The controversial video (watch it here) shows a scuffle between the officer and several juveniles; the officer discharged his firearm during the incident, according to the newspaper. 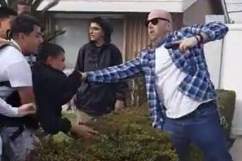 ABC7 reported that the incident “stemmed from ongoing issues with youths walking across the officer’s property. A confrontation ensued and the officer apparently tried to detain a 13-year-old, holding on to him and refusing to let go as the teen struggled to break free.” The officer discharged his gun but the bullet didn’t strike anybody, reported ABC 7.

Christian Dorscht and the unnamed LAPD officer involved in a struggle in Anaheim. The officer fired a shot after pulling a gun on Christian, 13, and other high schoolers during a dispute over them walking on his lawn, police say.

The “get off my lawn” angle led people on social media to compare the incident to the Clint Eastwood movie, Gran Torino. Authorities promised an impartial investigation; they had not yet released the officer’s name on February 22.

"Next time I see a kid walk on my lawn I'm pulling a gun out" that's the right thing to do! ? #GetOffMyLawn #Anaheim #Merica pic.twitter.com/lacOvqGZ3x

The teenager, Christian Dorscht, who is Latino, was identified by his parents as the boy seen in the video.

Christian Dorscht after he was released from juvenile detention. (Johnny Dorscht)

Christian, 13, and another boy were arrested, but the officer was not. Christian claims the off-duty officer called a girl a sexual slur during the incident.

Info regarding an off-duty #LAPD officer involved shooting on 2/21/17 in Anaheim-Your patience is appreciated as the investigation continues pic.twitter.com/fbkeum3wS5

Here are more photos and videos being shared on social media of the unrest:

APD has just arrested two protestors who had hands up in show of peacefull protest pic.twitter.com/0vMo5MUrIV

Protestor hits bong in front of APD in act of defiance @GustavoArellano pic.twitter.com/8hYXMGIF1p

Some members walked away, but 100-200 protestors remain on Palais & Euclid despite risk of arrest @GustavoArellano pic.twitter.com/oEPlwc0YjN

Read More
Breaking News, California, Police, protest
Anaheim protests devolved into riots over an off-duty LAPD officer shooting his gun during a scuffle with a group of teenagers. See videos and photos.