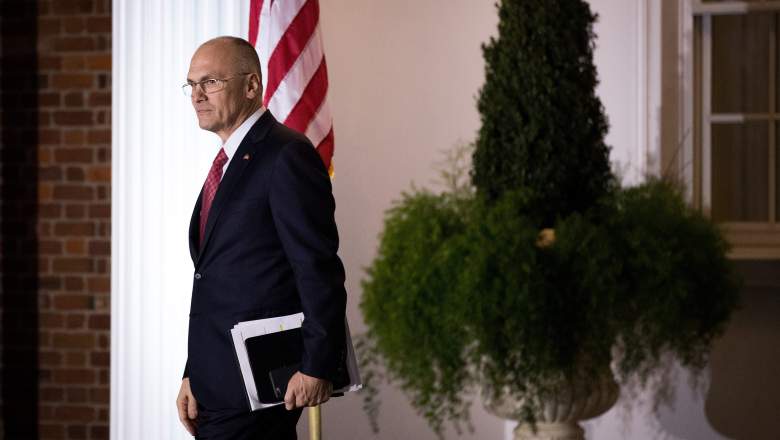 Andrew Puzder, the CEO of the company that runs Hardee’s and Carl’s Jr. fast food chains and Donald Trump’s nominee for Secretary of Labor, is the first Donald Trump cabinet nominee to drop out before the Senate gets to vote on his nomination. Thanks to a flurry of controversies and a heated Senate debate on the horizon, Puzder has withdrawn his nomination.

The New York Times has confirmed that Puzder has withdrawn his nomination.

“The simple truth is that given his relationship to employees at the companies he runs, he was not fit to lead a department responsible for defending workers’ rights,” Senator Bernie Sanders told the Times.

Puzder’s confirmation hearing before the Senate Health, Education, Labor and Pensions (HELP) Committee had long been delayed. It was scheduled for Thursday morning.

Today, CNN reported that top Republicans in the Senate have asked Trump to withdraw Puzder’s nomination. CNN previously reported that Senators Susan Collins, Lisa Murkowski, Tim Scott and Johnny Isakson will not vote for Puzder. Since Republicans only have a 52-48 majority, this would mean that the Senate would need at least 50 votes to get Puzder confirmed.

Shortly after CNN’s report, CBS News reported that Puzder is “expected” to withdraw his nomination himself. “I think he’s very tired of the abuse,” a source told CBS News.

Puzder, who does not support raising the minimum wage, needed the support of Collins, Murkowski, Scott, Isakson and Mike Enzi since all five are on the HELP Committee. However, Chairman Lamar Alexander has defended Puzder, calling him a leader “who understands how excessive regulation can destroy jobs and make it harder for family incomes to rise,” reports the Commercial Appeal.

Puzder was once accused of domestic violence by his ex-wife Lisa Fierstein. Back in January, Politico reported that Fierstein appeared on The Oprah Winfrey Show in disguise to talk about the allegations. Although she later retracted those claims, saying that they were only made up to boost her divorce settlement, women’s groups were still using the claims against Puzder.

Politico has obtained the video of Fierstein on Oprah, which was not available on YouTube or anywhere else online prior to today. Fierstein appeared on the show wearing a wig and sunglasses, and used the name “Ann.” Senators on the HELP Committee were given the tape by the Oprah Winfrey Network, which previously refused to release it to the media.

“Perpetuating these retracted 30-year-old allegations and an impulsive decision to appear on a talk show is nothing more than a desperate attempt to tarnish Andy Puzder at the expense of Lisa and their family,” a spokesman for Puzder and Fierstein told Politico today. The spokesman added that Fierstein and Puzder’s current wife, Deanna Descher, are friends.

“This is part of a desperate smear campaign to distract from President-elect Trump’s agenda of creating jobs and opportunities for American workers,” spokeswoman Liz Johnson said in an email to Politico in January. “As both Mr. Puzder and Ms. Fierstein have made clear, these were false allegations that were made 30 years ago, and in fact, they are good friends.”

The Washington Post reported that the Democrats on the Health, Education, Labor and Pensions Committee planned to show images from the racy Hardee’s and Carl’s Jr. commercials the chain has become known for.

Puzder previously defended these ads in a 2015 interview with Entrepreneur.

“I like our ads. I like beautiful women eating burgers in bikinis. I think it’s very American,” Puzder said at the time. “I used to hear, brands take on the personality of the CEO. And I rarely thought that was true, but I think this one, in this case, it kind of did take on my personality.”

Concerns have also been raised over Puzder’s employment of an undocumented worker as a maid. Puzder said that he and his wife paid back taxes in full to the IRS and California. He said in a statement on February 7 that he fired her and offered her help to get her legal status in the U.S.

When Trump chose Puzder, he said Puzder will help him enact policies that can “result in more jobs and better wages for the American worker.”

“He will save small businesses from the crushing burdens of unnecessary regulations that are stunting job growth and suppressing wages,” Trump said in a statement of Puzder.

Read More
Donald Trump, Politics
Thanks to a growing storm of controversies around him, Republicans have reportedly asked Donald Trump to drop his nomination of Andrew Puzder as Labor Secretary.