Sec. DeVos physically blocked by protesters from entering DC school–turned away and left. Unclear if she attempted another door. @ABC7News pic.twitter.com/buNgmOJbya

Tensions over the choice of Betsy DeVos as education secretary continue to run high as protesters blocked DeVos from entering a Washington D.C. school.

You can watch video of the incident, which occurred on February 10, above. Fox 5 reported that one of its reporters witness DeVos being pushed, and one person was arrested.

At least one person in custody after protesters tried to stop Betsy DeVos from entering DC school, @barnardfox5dc witnessed someone push her pic.twitter.com/V68Dl3fs7G

The protest occurred at Jefferson Middle School in Washington D.C.

ABC News reported that it wasn’t clear whether DeVos was able to enter the school through a different entrance. DeVos’ nomination by Donald Trump was so contentious that it marked the first time in U.S. history that a vice president cast a tie-breaking vote on a presidential cabinet selection. Democrats opposed DeVos, a wealthy Republican donor, because of her support for school vouchers.

ABC News reported that protesters wouldn’t let DeVos’ advance team near the school, either. KOMO News reported that the protest was organized by the teachers’ union. The union wanted to highlight its support for free public schools and equal educational opportunities, according to KOMO News.

Handful of protesters now standing in front of SW DC middle school ahead of visit by Sec. Betsy DeVos pic.twitter.com/uzhuyeXEeE

According to ABC, protesters “clashed” with a Secret Service detail before DeVos arrived at the school.

You can learn more about Betsy DeVos background and her family’s wealth here: 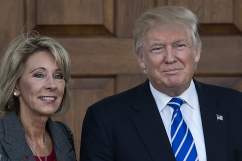 Learn more details here about how unusual DeVos’ confirmation vote was; although, vice presidential tie breakers are not unheard of in American history, they occurred more in the 1800s and have never been used before to push a cabinet choice forward. Thus far, DeVos has garnered the most intense opposition of any of Donald Trump’s nominees.