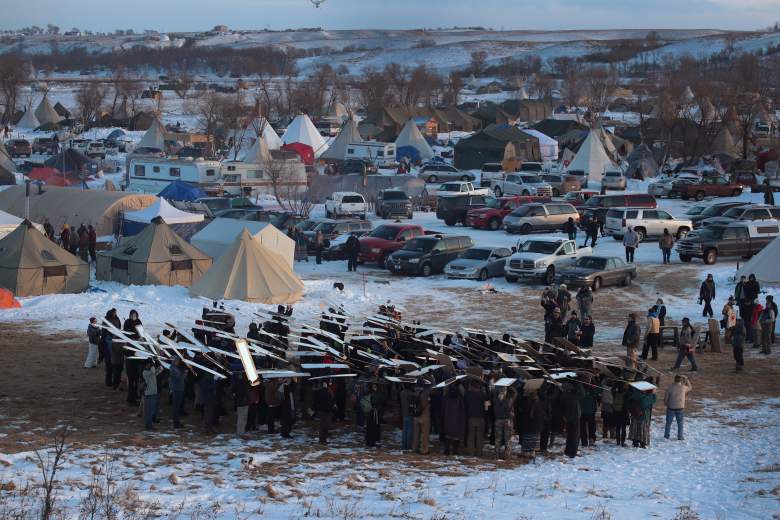 Activists participate in an art project conceived by Cannupa Hunska Luger, from the Standing Rock Sioux Tribe, at Oceti Sakowin Camp on the edge of the Standing Rock Sioux Reservation on December 3, 2016 outside Cannon Ball, North Dakota. Native Americans and activists from around the country have been gathering at the camp for several months trying to halt the construction of the Dakota Access Pipeline. (Getty)

The U.S. Army Corps of Engineers has announced that it plans to issue an easement for the DAPL to be finished beneath Lake Oahe after all, bypassing an environmental impact statement (EIS) that was supposed to be conducted. Standing Rock water protectors have vowed to fight this latest setback. The easement could be granted as early as Wednesday. Meanwhile, those who are protesting the pipeline are wondering how the EIS could just be shut down so quickly.

1. The U.S. Army Corps of Engineers Said It Will Grant the Easement As Soon as Wednesday, Letting ETP Begin Construction [Read the Letter Below]

The U.S. Army Corps of Engineers announced its decision in a letter to Congress today. (You can read the full letter here.) In its letter to Rep. Raul Grijalva, the Army said that it intended to grant an easement to Dakota Access LLC, a subsidiary of Energy Transfer Partners. The easement is for “installation, construction, operation, maintenance, and repair of a 30-inch diameter underground crude pipeline.” The easement gives a right-of-way across “government land” at Lake Oahe Dam and Reservoir.

The pipeline will cross 7.37 acres at Lake Oahe, and the letter states this is only over government-owned property. The letter goes on to say that because of the way the pipeline is being buried, a construction license isn’t needed and “the pipeline will not cross the property of any other federal agency.”

The Army intends to issue the easement for a term of 30 years.”

The letter continues, stating that ETP will be responsible for mitigating any damages done to the property or Lake Oahe during construction and maintenance. They will also be responsible for supervising the pipeline at regular intervals, immediately repairing any defects or leaks, and they’ll be liable for any damage to soil, water conservation measures including erosion control, environmental protection requirements, and ensuring non-disturbance of “historical, archeological, architectural, or other cultural artifacts encountered.”

The letter states that the Army also plans to waive its normal policy of waiting 14 days after Congressional notification.

Consistent with the direction in “Presidential Memorandum Regarding Construction of the Dakota Access Pipeline” dated January 24, 2017, the U.S. Army Corps of Engineers intends to waive its policy to wait 14 days after Congressional notification before granting an easement… The Corps intends to execute this easement at a time that is mutually convenient to the Corps and the Company, no earlier than 24 hours following delivery of this notification letter.”

On January 18, the Army had published a notice in the Federal Register that it would accept public comments on its project through February 20. But President Trump signed his executive memo a few days later, requiring that the review be expedited, along with the approval process, NPR reported. The ETP’s $3.8 billion, 1,172-mile pipeline, which would transfer oil from North Dakota to Patoka, Illinois, was almost complete when it was shut down late last year after environmental concerns had been raised.

He said that his analysis showed justification for reversing former President Barack Obama’s decision to explore alternative routes and have a full environmental impact statement. A notice about plans to terminate the study should be filed in the Federal Register soon, Bismarck Tribune reported.

Jan Hasselman, lead lawyer for the suing Sioux tribes, had argued previously that granting an easement before the environmental review was complete would be unlawful. She said that Trump’s memo represented a pattern of broken promises to Indian tribes and a violation of treaty rights.

3. Opponents Have Very Little Time to Take Legal Action in Response to the Decision

As a result of the Army’s decision, opponents are left with little time to take legal action, NPR reported. The Director of the Indigenous Environmental Network said in a statement that they would fight the decision. Granting the decision without an environmental review, they said, was not the end of the fight, but the beginning.

The Trump administration — yet again — is poised to set a precedent that defies the law and the will of Americans and our allies around the world.”

Sen. Heidi Heitkamp said in a statement: “For the North Dakota families, workers and tribes who have felt the impact of the Dakota Access Pipeline conflict every day — today’s announcement … brings this issue one step closer to final resolution — and delivers the certainty and clarity I’ve been demanding…”

Archambault was very resolute in his statement to continue fighting for Standing Rock, KFRYTV reported. His statement says, in part:

The drinking water of millions of Americans is now at risk. We are a sovereign nation and we will fight to protect our water and sacred places from the brazen private interests trying to push this pipeline through to benefit a few wealthy Americans with financial ties to the Trump administration… The environmental impact statement was wrongfully terminated. This pipeline was unfairly rerouted across our treaty lands… As Native peoples, we have been knocked down again, but we will get back up, we will rise above the greed and corruption that has plagued our peoples since first contact. We call on the Native Nations of the United States to stand together, unite and fight back.”

4. Standing Rock Water Protectors Have Vowed to Fight Back

The Standing Rock Water Protectors are not going to accept the decision. They’ve already vowed to fight back. The water protectors have said that Lake Oahe and the lands the pipeline cross are sacred to Sioux Indian Tribes, Chicago Tribune reported. In addition, they are concerned this will result in environmental damage to their lands and water.

The Indigenous Coalition of Standing Rock has called for tomorrow, February 8, to be an international day of emergency actions to disrupt business and show global resistant to fossil fuels:

Johnny Dangers, an activist and one of the water protectors, released a video on Facebook in response. “We will resist corporate colonialism with every fiber of our bodies until justice for Mother Earth is served!,” he wrote on Facebook.

5. Protestors Are Planning  #NoDAPL Last Stand Protests Around the Nation

The decision came as a huge blow to water protectors, who had just celebrated in December a decision by Obama’s administration to possibly reroute the pipeline after an environmental assessment. But this isn’t the end, water protectors and their supporters say. They are planning a #NoDAPL Last Stand series of protests on Wednesday at local federal buildings and at the offices of banks that are financing the DAPL.

Read More
Breaking News
The U.S. Army is canceling an environmental study and granting an easement to finish the DAPL. Here are the details and how Standing Rock will respond.