A Day without Immigrants #Feb16 pic.twitter.com/5kIFVEDJbS

Protests, strikes and boycotts are being held around the country on February 16 for in an effort to show America what a “Day Without Immigrants” would be like, organizers say.

“From doctors to dishwashers, immigrants are integral to daily life in the U.S.,” Janet Murguía, the president of the National Council of La Raza said on Twitter.

In fliers distributed by organizers, undocumented and documented immigrants are asked to “not attend work, not open up our businesses, not shop online or in stores, not eat at restaurants, not buy gas, not attend class, skip school and not send children to school.”

The flyer sends a message to President Donald Trump, who has sparked outrage in the immigrant community both for his executive order banning travel from seven Muslim-majority countries and his plans to build a wall on the Mexican border, as well as deport undocumented immigrants. Activists have said there has been an increase in ICE raids and deportations since Trump took office.

“To the president: Without us and our contribution this country is paralyzed,” the flyer says. “We might lose a day of work but we will win so much more.”

Here’s what you need to know a “Day Without Immigrants”:

"A day without immigrants" is tomorrow! Spread the word ✊?✊?✊? #ADayWithoutImmigrants pic.twitter.com/GxERSMBqaL

The “Day Without Immigrants” movement does not have a leader and is not being organized by a singular group. It grew organically on social media as unrest about President Donald Trump’s immigration policies has grown since he took office last month.

“We don’t know where this started, and as far as we know, there isn’t anyone putting it all together,” Maria Fernanda Cabello, an organizer with the immigrant group Cosecha, told the New York Times. “We started seeing messages about it in different cities a few weeks ago, and it’s really picked up in the last couple of days.”

Cabello and Coscheca have been planning a similar boycott for May 1, but are also supporting the February 16 movement, saying it could be a “dry run” for an even bigger event.

Facebook groups and fliers were started by local organizers helped spread the word about the protest, the Times reports.

Many national immigrants groups are now backing the effort.

2. Businesses Around the Country Will Close in Support of a ‘Day Without Immigrants’

Several business around the country have closed down to show support for the boycott and strike.

You can see a list of some of those businesses here.

Chef Jose Andrés, who has sued Trump, and is being sued by Trump, after backing out of a deal to open a restaurant in Trump’s new D.C. hotel, is among those supporting the strike.

“It was a very easy decision,” Andrés told NPR. “When you have employees that have been with you almost 25 years, and they come to you in an organized way and they tell you, ‘Don’t get upset but Thursday we are not coming to work,’ [the] next thing you ask is, ‘What’s going on? What’s happening?’ So I decided to join them and support them — that’s what we’re doing.”

Andrés is one of many restaurant owners to close down on Thursday.

“We are here, we participate in different events, we own businesses, we have professional people working different aspects in society,” Maria Garcia, the owner of Revolucion Coffee House in Portland, Oregon, told KGW-TV.

“You know what, my restaurants don’t function without immigrants. That starts in the field, people who pick our food, the processing plants, the slaughterhouse, I could go on,” she told the Associated Press.

According to NPR, there are 11 million undocumented immigrants nationwide. And 1 in 4 restaurant workers are foreign born, while immigrants also make up most of the labor used on farms.

Andrés told NPR the role immigrants play in slavery is a “new form of slavery, to a degree.”

“We let them come in,” he said. “We need them to work on the farms. We will not be able to be serving a salad at the [congressional] cafeteria if we didn’t have many of those people working, very often underpaid, without health care, working long hours.” 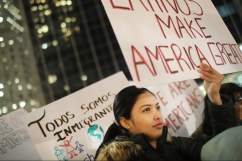 A Day Without Immigrants: List of Cities & Businesses Participating

3. A March in Washington D.C. & Demonstrations Around the Country Are Also Planned

Protestors gather at the Milwaukee County Courthouse where they attend a rally against President Donald Trump’s policy on immigration February 13, 2017 in Milwaukee, Wisconsin. (Getty)

Along with boycotts and strikes, a march is planned Thursday in Washington D.C. to the White House, USA Today reports.

The march is scheduled for noon.

Other protests and demonstrations are expected in cities across the U.S., including in New York City and Los Angeles.

Thousands protested earlier this week in Milwaukee, Wisconsin, where organizers held a “Day Without Latinos” demonstration.

“Trump wants to paint immigrants as something we should be afraid of; that it is something bad,” said Christine Neumann-Ortiz, the director of Voces de la Frontera, told NBC News. “When people do this general, wide strike what they show is that on the contrary immigrants are lifting up this economy and when they withhold their contributions we see a decline.”

4. Schools in New Mexico & Elsewhere Prepared for Absences, but Said They Expect Students to be in Class

“While we respect everyone’s right to have their voices heard and to participate in civic action such as protest, all students and staff are encouraged and expected to come to school,” Alma Pena-Sanchez said in a recording to parents and staff, according to the Los Angeles Times. “I urge students and staff not to disrupt learning by participating in protest or walkouts during the instructional day.”

A similar sentiment was issued by officials in Albuquerque, New Mexico.

“We respectfully ask all parents to acknowledge that students need to be in class every day to benefit from the education they are guaranteed and to avoid falling behind in school and life,” a letter to parents said.

D.C. Public Schools chief John Davis said in a letter to parents that school would continue as normal on Thursday.

“We highly value and are committed to fostering a learning environment where staff and students feel safe and secure and we respect the right to self-expression and peaceful protest,” the letter said, according to the Washington Post.

5. A Similar Protest, the ‘Great American Boycott,’ Was Held in 2006 Over the Illegal Immigration Control Act

The protest is similar to a May 1, 2006, movement called the “Great American Boycott,” which was in protest of the Illegal Immigration Control Act of 2005.

Thousands of protesters took to the streets in cities around the country.

Read More
5 Fast Facts, Breaking News, Immigration, Politics
Day Without Immigrants strikes, protests and boycotts are being held around the country on February 16. Find out more about the movement here.